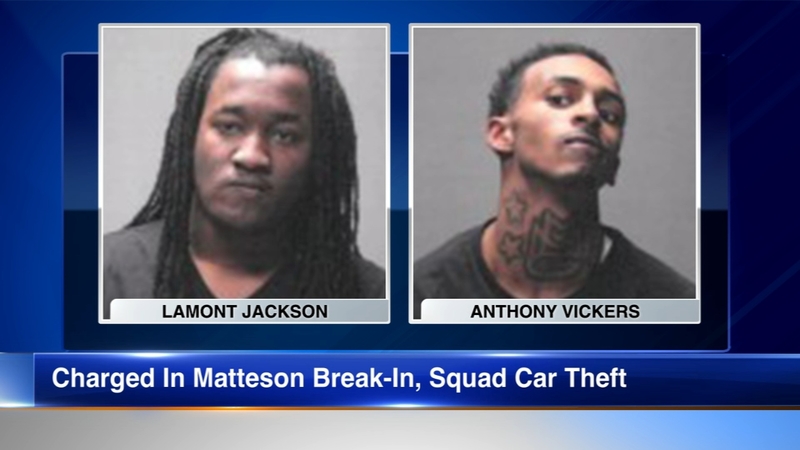 MATTESON, Ill. (WLS) -- Two men and a 15-year-old boy face charges linked to a break-in at an auto auction in suburban Matteson.

Police said Anthony Vickers, 25, and Lamont Jackson, 20, were part of a group that tried to steal vehicles from the lot Monday.

They allegedly almost hit officers when they tried to drive away. A fourth suspect who stole a police car, then crashed and is still on the run.

According to the Matteson Police Department, around 4:15 p.m., officers responded to calls that several people cut a security fence with bolt cutters and attempted to steal vehicles at the Greater Chicago Auto Auction in the 20000-block of Cox Avenue.

The suspects were seen getting into a vehicle on the lot and driving around at high rates of speed to escape, police said.

The suspects drove at and nearly struck police and security guards, police said. They eventually crashed the vehicle after an attempt to escape the lot, police said.

The suspects then fled the vehicle and ran south through the lot, leading officers on a chase. They jumped a fence on the southeast side of the lot and ran into a subdivision, when one of the suspects was immediately taken into custody, police said.

Two other suspects were later found hiding under a deck and were also taken into custody, police said.

A Matteson police K9 unit pulled up to the area to search for a fourth suspect. The suspect got into the vehicle and stole it after officers exited the vehicle, police said.

The suspect drove off in the police vehicle on Northbound Interstate 57. Police monitored the vehicle's GPS tracker, which indicated the suspect exited at 147th Street and became disabled at 147th and Dixie Highway in Harvey.

Witnesses said the suspect got out and fled on foot and he is not in custody. No police dog was in the squad car at the time.

Vickers and Jackson were each charged with aggravated possession of a stolen vehicle, vehicle theft conspiracy and criminal damage to property. The boy was also charged and his case was referred to the Cook County Juvenile Court.

The Greater Chicago Auto Auction released a statement Tuesday saying, "Yesterday, an attempted vehicle theft occurred at our Manheim Chicago site. Fortunately, no one at our location was injured. Manheim takes matters like this very seriously and is committed to protecting the company's property and the safety of our clients, team members and guests. We maintain a zero tolerance policy for criminal acts such as this and will prosecute any involved parties to the fullest extent of the law. We are working with the Matteson Police Department on their investigation and ask that you contact them for more information."