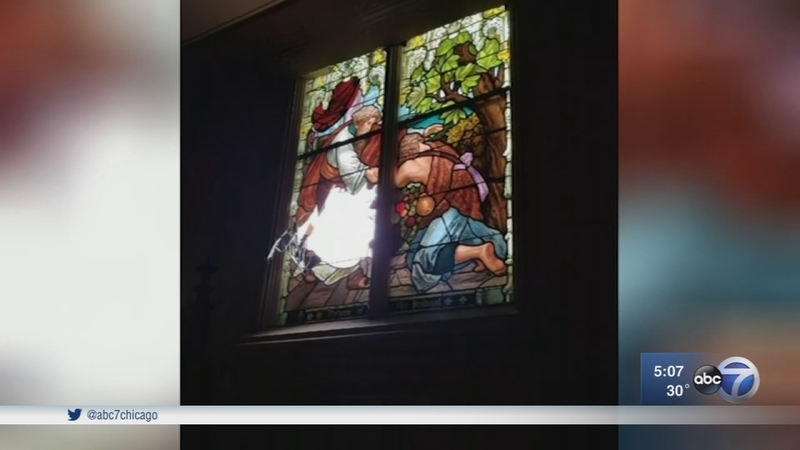 CHICAGO (WLS) -- A brick was used to break into Chicago's second-oldest church last week, damaging stained glass that dates back more than 150 years.

Holy Family Church in University Village has survived a lot throughout history. The church, which was built with the help of parishioners putting their nickels and dimes together, survived the Chicago fire. It was also saved from demolition in the 1980s after it fell into disrepair.

On Dec. 13, the church was targeted by would-be burglars who smashed a stained glass window to get in. A brick was found inside the church, Chicago police said.

"My suspicion is that they were looking for money since all of the poor boxes were open," said Father Michael Gabriel of Holy Family Church.

Gabriel said once inside, the suspect ransacked cabinets and drawers, but nothing was taken. He suspects the person who did it knew the layout of the church, climbing up a wall to get to the roof and access the window.

"If you look at that window, you might not know from the outside how far of a drop down it is," said Gabriel.

Gabriel said at first, he was angry about the damage to the window, which depicted the biblical story of the prodigal son, a wayward man who is forgiven by his father.

"If there's a lesson for us, it's that we need to reach out for forgiveness," said Gabriel.

Community Activist Raul Montes Jr. is offering a reward for information leading to the arrest of the suspects.

"This is beyond comprehension, it's a shame," Montes Jr. said.

Despite the break in, Holy Family was preparing for Christmas on Wednesday, giving thanks for the church's rich history.