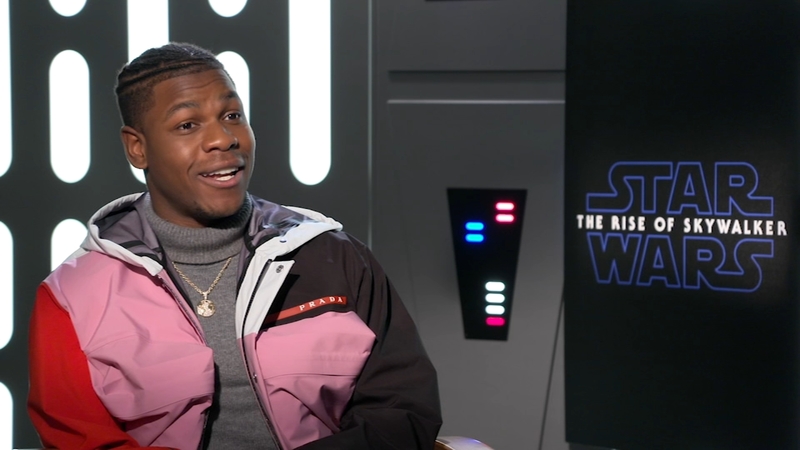 We are just days away from the release of "Star Wars: The Rise of Skywalker" and fans can hardly wait. Two Star Wars films ago, a new cast of characters was introduced and they now wrap up the saga. Janet Davies spoke with one whose role has finally come full circle.

Stormtrooper, deserter, Resistance fighter. In "The Rise of Skywalker," Finn has finally found himself.

"Definitely knows what team he fights for and doesn't have doubts about it," said John Boyega, who plays Finn. "More fearless than the original, much more brave , more stern. Emotionally stable now. Before he was so frantic and rightly so. He was moved from extreme world to another."

For the first time, Finn joins forces to fight the Dark Side with Rey, the film's protagonist, and Poe, a pilot for the Resistance.

"I can't lie, I think we should have done this earlier - all of us together," Boyega said. "But it's such an amazing dynamic. And you get to see some of our personal relationships manifested through this relationship. It's quite charming to see."

What some fans have wanted to see is a Finn/Poe romance.

"People who feel they would like to see Finn and Poe together - they create their own gay art and there are videos," Boyega said. "I think it's another way of the fans interacting with the universe but obviously more creative and more in a decisive position and it's been interesting and funny. Very interesting."

The film might even turn his own family into "Star Wars" fans.

"My family are not big Star Wars fans, and as everyone knows, my Dad didn't really know what it was and to be honest, he watches the film he doesn't know what's going on," he said. "He doesn't have the guts to go back and do the entire marathon. But I think this one specifically, this one is easy to digest especially the way J.J. has done it - I think I am going to have more fans from fam."
Report a correction or typo
Related topics:
arts & entertainmententertainmentstar wars
Copyright © 2022 WLS-TV. All Rights Reserved.
TOP STORIES
Winter storm warning issued north for lake effect snow | Live Radar
Boy, 11, charged in armed Chicago carjacking caught on video
Lincoln Park HS students post video on races they'd never date
Antioch man missing for days after car crash
Lower Wacker shooting of carjacking suspect caught on video
2 charged in murder of girl, 8, in Little Village denied bond
2 dead in Ravenswood shooting that led to fiery crash: CPD
Show More
2 shot, 1 fatally, outside Roseland church
Toddler credited with saving family of 7 from devastating house fire
Chicago Weather: AccuWeather Alert Day: Winter Storm Warning Friday
Chief Cook Co. judge defends judicial system in rare public address
Housing needed for 400 more Afghan refugees expected in Chicago in Feb
More TOP STORIES News