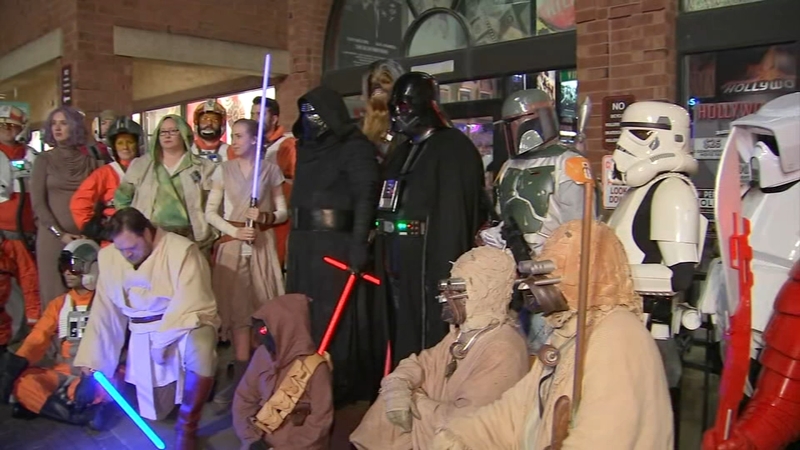 Fans turn out for first 'Rise of Skywalker' showings in Chicago

CHICAGO (WLS) -- The wait is almost over! The third and final film in the "Star Wars" saga opens Friday, but you can see it at select theaters in the Chicago area starting Thursday afternoon.

The early shows start at 6 p.m. and continue through the night. Fans came out in droves, dressed in their best intergalactic space saga costumes.

"It was incredible. I didn't see a single person in there that wasn't laughing or crying or anything," said John Krasnow, fan.

At AMC River East, "Star Wars" die-hards saw "The Rise of Skywalker" at the end of a 28-hour marathon of all nine "Star Wars" films screened in order.

"I saw 'The Phantom Menace' in 1999 with my wife," said fan Mark Schult. "It was two months before I got married. I actually camped out for that movie."

And where was his wife tonight?

In "The Rise of Skywalker," we reunite with Poe, Finn and Rey and see an old friend, Billy Dee Williams, as Lando Calrissian.

"It hit every note that it needed to and brought back all the nostalgia of all the films rolled into one," said Joshua Stuebe, fan.

In Woodridge, "Star Wars" fever hit hyperdrive. The Midwest Garrison dressed up for charity. They were among many feeling the Force on this opening night.

"I wasn't here for the beginning of the saga when it came out, but I experienced it," said Valerie Nolan. "And being able to be here for the end of it I think is actually kind of a privilege."