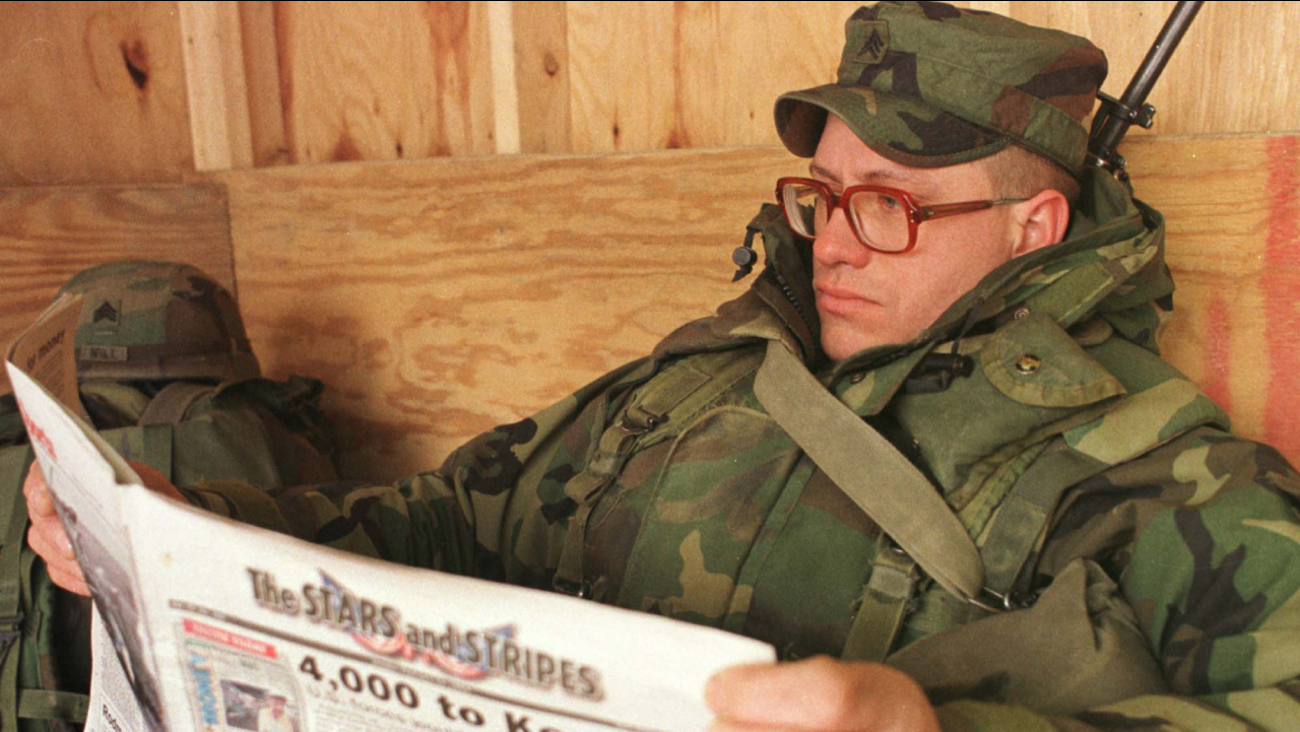 one of the members of NATO led-peacekeeping forces in Bosnia reading Stars and Stripes newspaper at US Air base Eagle, near Tuzla, on Sunday February 14, 1999. (AP Photo/Amel Emric)

WASHINGTON -- The Pentagon has ordered the military's independent newspaper, Stars and Stripes, to cease publication at the end of the month, despite congressional efforts to continue funding the century-old publication.

The order to halt publication by Sept. 30, and dissolve the organization by the end of January, follows the Pentagon's move earlier this year to cut the $15.5 million in funding for the paper from the Defense Department budget. And it is a reflection of the Trump administration's broader animosity for the media and members of the press.

Members of Congress have objected to the defunding move for months. And senators sent a letter to Defense Secretary Mark Esper this week urging him to reinstate the money. The letter, signed by 15 senators - including Republicans and Democrats - also warns Esper that the department is legally prohibited from canceling a budget program while a temporary continuing resolution to fund the federal government is in effect.

"Stars and Stripes is an essential part of our nation's freedom of the press that serves the very population charged with defending that freedom," the senators said in the letter.

Sen. Lindsey Graham, R-S.C., in a separate letter to Esper in late August, also voiced opposition to the move, calling Stripes "a valued 'hometown newspaper' for the members of the Armed Forces, their families, and civilian employees across the globe." He added that "as a veteran who has served overseas, I know the value that the Stars and Stripes brings to its readers."

From July 30, 2020: The dates of presidential elections are enshrined in federal law and would require an act of Congress to change.

In the memo, the department said Esper made the decision as a result of his department-wide budget review. Signed by Army Col. Paul Haverstick, acting director of the Pentagon's Defense Media Activity, the memo said plans to close the paper are due on Sept. 14 and the last newspaper is to published on Sept. 30.

The Stripes ombudsman, Ernie Gates, told The Associated Press on Friday that shutting the paper down "would be fatal interference and permanent censorship of a unique First Amendment organization that has served U.S. troops reliably for generations."

The first newspaper called Stars and Stripes was very briefly produced in 1861 during the Civil War, but the paper began consistent publication during World War I. When the war was over, publication ended, only to restart in 1942 during World War II, providing wartime news written by troops specifically for troops in battle.

Although the paper gets funding from the Defense Department, it is editorially independent and is delivered in print and digitally to troops all over the world.

The Pentagon proposed cutting the paper's funding when making its budget request earlier this year, triggering angry reactions from members of Congress.

The House-passed version of the Pentagon budget contains funding for the paper's publication, but the Senate has not yet finalized a defense funding bill.
Report a correction or typo
Related topics:
politicspentagonmilitarynewspaperu.s. & world
Copyright © 2020 by The Associated Press. All Rights Reserved.
More Videos
From CNN Newsource affiliates
TOP STORIES