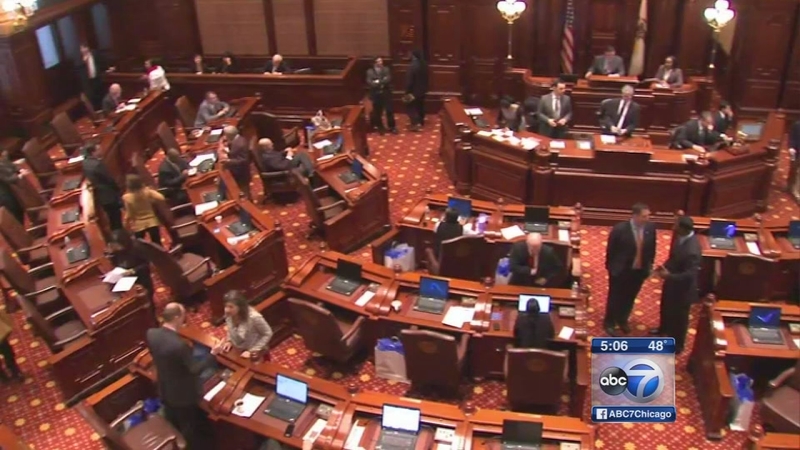 Weekend budget battle not over

SPRINGFIELD, Ill. (WLS) -- The state Legislature's regular session is slated to end midnight Sunday and a budget deal is yet to be reached, but lawmakers did pass bills related to pensions and unions on Saturday.

Before the state House adjourned Saturday afternoon, members approved a bill that would restructure Chicago's balloon pension payment that is due later this year.

Supporters say that if the bill is not restructured, Chicago city property taxpayers could see a major increase on their bills.

The measure, opposed by most Republicans, also says any city revenue from a yet-to-be-approved Chicago casino must be applied to pension payments. It now goes to the Senate, where one Republican called it another example of Chicago kicking the police and fire pension can down the road.

"They need to start facing this problem," said state Sen. Matt Murphy, R-Palatine. "They can't continue to put it off. They're going to really hurt their police and fireman one day."

Also on Saturday, Senate approved a bill passed by the House on Friday that would remove the newly-elected Gov. Bruce Rauner as the lead negotiator on a new contract for state workers. The current contract expires June 30.

"In this situation we're giving up our right to strike and ultimately putting our fate in the hands of an independent arbitrator," said John Cameron, of AFSCME Council 31.

"This strikes me as politics and it's really almost personal," Murphy said. "Bruce Rauner ran to make a difference. This is one of the ways he can make a difference and the Democrats are trying to take that away from him."

Officials from Rauner's office said the governor would veto the bill if it reaches his desk.