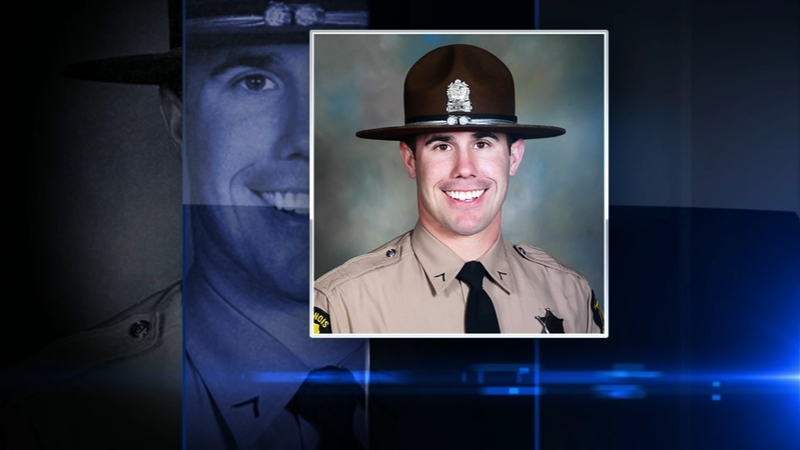 CHICAGO (WLS) -- An Illinois State Police trooper who was shot Friday while executing a search warrant has died, according to state police.

Hopkins was transported to a local hospital with life-threatening injuries. He was pronounced dead at around 6:10 p.m. Friday night, Illinois State Police said.

"It is with profound heartache and unfathomable sadness that we inform you of the death of Trooper Nicholas Hopkins," said Illinois State Police Acting Director Brendan Kelly. "Trooper Hopkins laid down his life while protecting the citizens of this state."

Before sunrise Friday Illinois State Police troopers moved in on a downstate home to serve a warrant. During a gunfight, one trooper was fatally wounded.

Several people were since taken into custody at the address, with police moving in military-style armored vehicles. The front of the home was plowed down by the vehicles. At one point, an apparent explosion occurred inside the home, right in front of a state police armored van.

A standoff was underway at the address all day Friday.

In a statement following the shooting, Illinois Gov. JB Pritzker noted state troopers display unbelievable courage and "put their lives on the line for us every single day."

Law enforcement experts have long considered the execution of a search warrant to be the most dangerous assignment for any officer. It typically involves an unannounced visit to a known or suspected violent offender, an early morning raid and possibly an armed person behind a closed door.

There have been numerous similar scenes playing out the past decade.

According to records kept by the Officer Down Memorial Page, an organization that tracks police deaths, there were 73 officers killed nationwide while attempting to serve warrants from 2009 to 2019.

In March, a member of the U.S. Marshal's Service Great Lakes Fugitive Task Force was shot and killed while executing an arrest warrant at a Rockford motel. The officer was a 35-year-old McHenry County deputy sheriff assigned to the fugitive task force. Following the motel shooting, the gunman led police on a 100-mile chase before crashing in a downstate field and being taken into custody.

During that operation, shots came from inside the home and the trooper was hit. He had non-life-threatening wounds and the accused shooter was taken into custody.