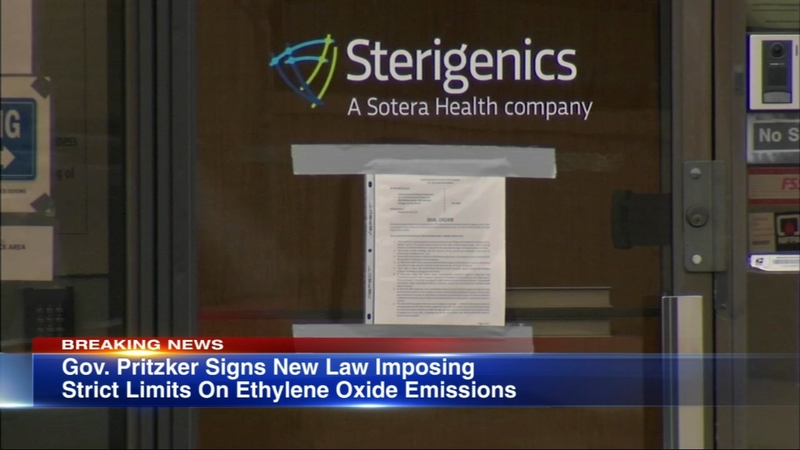 LAKE COUNTY, Ill. (WLS) -- Lake County officials have received preliminary results from tests measuring the levels of cancer-causing chemical ethylene oxide present in the air near medical sterilization plants in Waukegan and Gurnee. The results come on the same day that Governor JB Pritzker signed a law imposing the country's strictest limits on the chemical's emissions, which was spurred by community uproar in south suburban Willowbrook about the amount of the chemical detected in the air there.

Willowbrook residents began raising concerns about the chemical almost a year ago after a federal report found that Sterigenics, a medical sterilization company based in the community, was releasing a level of the gas that could be harmful to the public.

The plant shut down in February after several rounds of environmental testing. A study from the Illinois Department of Public Health the following month confirmed that there were higher rates of cancer near the plant.

The situation in Willowbrook raised concerns among residents in Lake County, where Medline and Vantage Specialty Chemicals use ethylene oxide. Environmental testing began earlier this month. The Lake County Health Department announced Friday that preliminary results indicated elevated levels of ethylene oxide at one location in Waukegan and at varying lower levels at all other sites where measurements were taken. Test results were sent to the Illinois Environmental Protection Agency, according to Waukegan Mayor Sam Cunningham, and are available to the public online.

Meanwhile, under the new legislation Pritzker signed Friday, companies that use ethylene oxide must capture all of the chemical's emissions within their facilities and conduct annual tests and send results to the state Environmental Protection Agency.

"Protecting the health and well-being of the people of Illinois has always been my top priority, and I'm proud that this legislation keeps dangerous pollutants out of our communities," Pritzker said in a statement. "Families in affected areas can breathe easy. Illinois now has the strictest safeguards in the nation, and I appreciate the hard work of the General Assembly in developing this bipartisan legislation and bringing it to my desk."

"From the moment we found out about the risks we faced, our Village's number one priority has been the health and safety of our residents, and those who were affected around us," Willowbrook Mayor Frank Trilla said in the statement from the governor's office. "Words cannot express how grateful we are for this legislation and what it will do to address the problem going forward."

Stop Sterigenics, a community group that has been vocal about pushing for testing and action in Willowbrook, applauded lawmakers for signing the legislation into law but said it doesn't go quite far enough.

"The law functions as a tourniquet, limiting but not stopping ethylene oxide poisoning," the group said in a statement. "It reduces, but does not stop exposure to the toxic gas while the State and its agencies determine next steps."