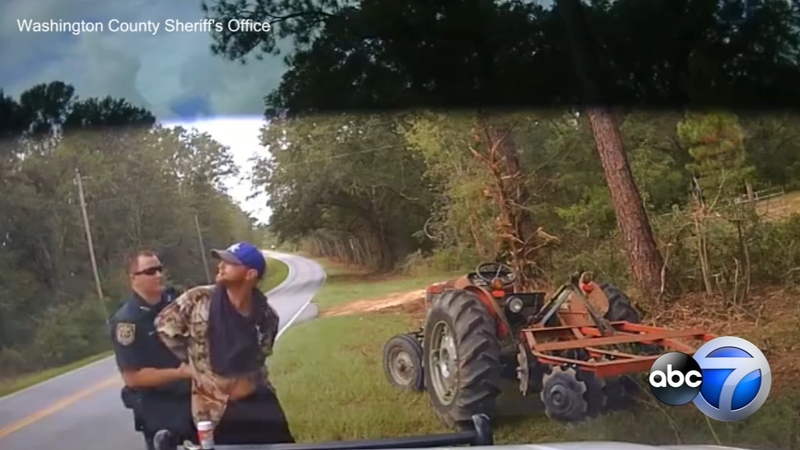 CHIPLEY, Fla. (WLS) -- A Florida sheriff's deputy used a Taser on a man who became violent and tried to flee after he was pulled over while riding a tractor he allegedly stole from a 71-year-old man.

The dashcam video posted on Facebook by the Washington County Sheriff's office had nearly 50,000 views by Wednesday morning.

The sheriff's office said a deputy spotted the tractor driven by Charles McNeil swerving on Sept. 28 and initiated a traffic stop, during which McNeil provided a false name and invalid driver's license.

During a search, the deputy said he found a knife and partially-labeled prescription medication bottle containing pills. When the deputy began to detain McNeil, he turned away and "aggressively attempted to flee."

As the deputy continued to attempt to apprehend McNeil, authorities said the suspect struggled with the deputy and attempted to pick him up and slam him to the ground. During the altercation, McNeil fled again and the deputy chased after him and deployed his Taser.

The video shows McNeil dropping to the pavement after being hit by the stun gun. The sheriff's office said he hit his head and lost consciousness. When he came to, he provided his real name.

McNeil is facing felony charges related to the incident, including battery on a law enforcement officer.

The sheriff's office said McNeil was released from prison earlier this year and is currently out on bond on unrelated felony drug charges.