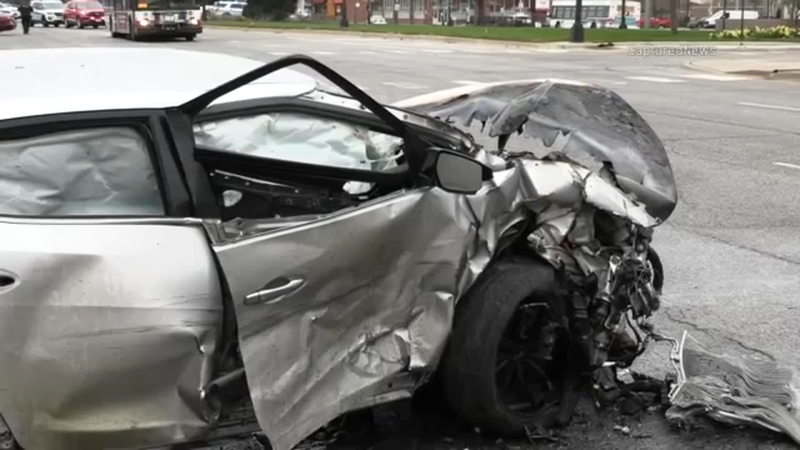 CHICAGO (WLS) -- Three people were critically hurt in a traffic crash Friday morning in the Calumet Heights neighborhood are now expected to be okay, according to police.

The mangled car wrecks were visible well down the block, giving passersby an idea of the magnitude of the impact.

Police said around 7:30 a.m. one car with three people in their 20s heading north on Stony Island crashed into the other car, which was heading west on 87th Street with two women, ages 70 and 63, inside.

"It was chaos," said Rainier Fortineaux, who witnessed the crash aftermath.

A 27-year-old man was taken to the hospital in good condition and the two women, age 63 and 70, have non -life threatening injuries, according to officials.

A man, going by Eric -- who didn't want to show his face, said he and his wife saw one of the cars involved speeding just moments before he saw smoke.

"He jetted past us so fast, and we was like 'maybe are they racing or what? Maybe they're just late for work.'" Eric said. "I'd say about 75 miles an hour."

He also said the silver car on the scene was on fire and added that road conditions were slick.

"This is the floor here. And they knocked it all the way back," Fortineaux pointed out.

Fourtineaux said another shop owner told him that at one point the sedan had smashed into his flower shop storefront.

The magnitude of the impact is clear with both cars destroyed. One wreck ending a half-a-block from where police said the collision happened. The other coming to a stop even further north, with car parts scattered throughout the area.


"The main thing, I hope everybody was okay 'cause this is crazy," Fortineaux said.

Police said they believe is all started with the man running through a stop sign at high speed.

Chicago police continue investigating to determine if any citations or arrests will be made.