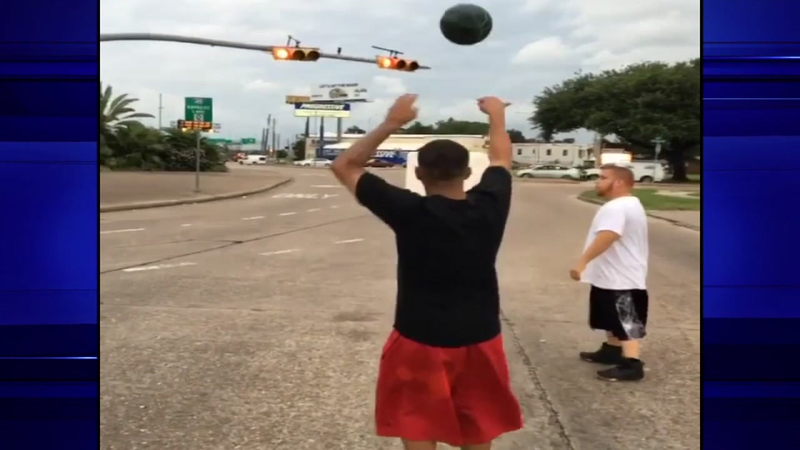 HOUSTON -- Two pranksters who were captured on video shutting down one of the busiest roads in Houston with a game of basketball said they have no regrets.

The cousins were making a viral video on an interstate feeder ramp. Drivers leaned on their horns as the pranksters went one-on-one using a kids' plastic hoop. Some cars went around, barely missing them.

Video posted to Instagram shows the hoops game in the middle of the road.

Houston police are aware of the video, and are looking into it.

"I don't think it's OK, but I think it's funny," said the man responsible for the video. "I apologize from the heart. I wasn't here to hurt nobody."

He and his cousin shot the video on Tuesday, May 31. It was actually their second try at a viral video.

"Some guy ran over the goal and drug it for maybe like ten seconds," he said. "We had to run and chase him down and luckily somehow it went over. We got to recover it."

His Instagram page, @MYHouseIsDirty, has hundreds of prank videos. In one, he's riding a bike down busy Highway 610 with his cousin on the handlebars. They do cartwheels and pour drinks on the highway.

And it's not just highways hijinks.

Just Tuesday, he shut down a Popeye's drive-thru and started selling his own chicken.

He said he doesn't want to be a role model. He's just a guy having fun.

This isn't the first time Houston traffic has been stopped by bizarre behavior. Last December, Vidal Valladares had the Gulf Freeway shut down so he could propose to his girlfriend. He was later charged with obstruction of highway.