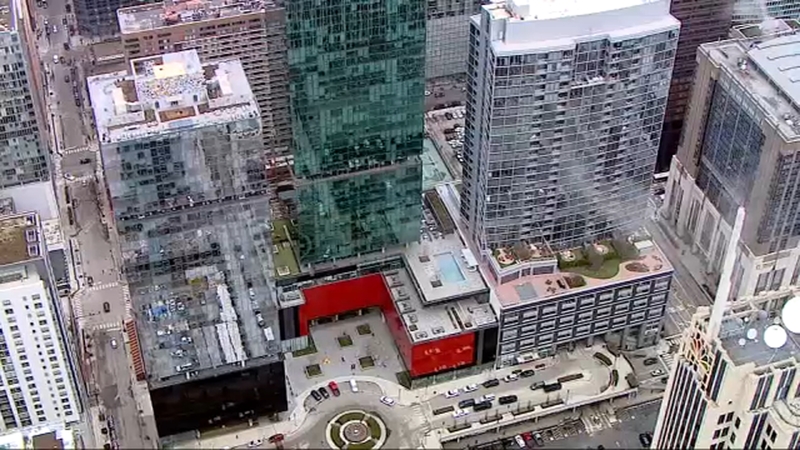 CHICAGO (WLS) -- Police conducted a search warrant Friday and removed more chemicals from an apartment in Streeterville where explosives were found Wednesday.

Chopper7 HD was overhead 240 E. Illinois St. around 2 p.m. Friday after officials confirmed they were in the "vicinity."

Police and the Chicago Fire Department Hazardous Incident Team could be seen outside the building Friday afternoon.

Emergency responders first removed material that could be used to make explosives from the Streeterville high-rise Wednesday, hours after a man's body was discovered there, police said.

Chicago police first discovered the body of Theodore Hilk, 30, at 11:30 p.m. Tuesday night in a unit at 240 E. Illinois St. after being called there for a well-being check.

Officers obtained a search warrant and returned to the site Friday, where they found more "chemical compounds," Chicago police said.

Police said investigators "are in the process of safely removing the items as well as collecting other pieces of potentially relevant evidence."

"Chemical compounds were discovered within the apartment and analyzed. Investigators are in the process of safely removing the items as well as collecting other pieces of potentially relevant evidence. Investigators are working diligently to conclude the operation," Chicago police said after executing a search warrant at the building Friday.

One of Hilk's family members told police the man had not been heard from in several days, Chicago Police Superintendent Brown said Thursday.

Chicago police said lead azide - a chemical often used in exploding bullets - was found during their search of a Streeterville apartment where a man was found dead.

When police arrived at Hilk's unit, they heard water running, but no one came to the door. Law enforcement officials were able to enter the unit and found Hilk deceased. It appeared he had been lying there for some time, Brown said.

"A strong odor was emanating from the apartment and officers began getting sick while inside the apartment. So we called the fire department hazmat," Brown said.

Officials began to suspect some sort of "lab" might be present, but no illegal drugs or material to make them were found, Brown said.

Police described a "hoarding-type" situation which made it difficult to identify the location of the substance.

About 4 p.m. Wednesday, roughly 16 hours after the initial investigation began, police determined there was a hazmat threat in the building, and a bomb squad was called to the scene.

One man who said he lives in the building but didn't want to talk on camera shared a video, in which residents were apparently being asked to shelter in place as late as 9:35 p.m. Wednesday.

Authorities could be seen rushing the apparent bomb-making materials away about 11 p.m. Wednesday.

CPD evacuated two floors of the high-rise and used "special containers" to dispose of the questionable material.

Brown said Thursday some substances that could be used to make bombs were found throughout the unit, including highly-explosive chemicals.

One of the substances was lead azide, Brown said. University of Chicago Chemistry professor Scott Snyder said the compound "shouldn't be that hard to make if you had access to the right chemicals."

"What's I think particularly scary about it though is that it's pretty easy to have an explosion, so it's sometimes used, typically, as like an agent to help something else explode, but it itself is actually quite explosive," Snyder added.

Companies will sell it to people with expertise, but this shouldn't be readily available for purchase to the general public, he said. Meaning, without working in the proper field, someone would have had to make this.

"You wouldn't really have a reason to be making this at all unless you had some inclination to make something that is explosive," Snyder said. "There is not really a secondary use for this that would make any sense, at least in a household environment."

Snyder said he's never made lead azide himself, so he doesn't know if it would have caused the strong odor that police smelled.

Investigators did not say whether any fully-formed explosives were found inside the apartment.

After a body was found in a Streeterville high-rise late Tuesday night, the building was evacuated roughly 16 hours later due to a hazmat concern.

Patrick Spearman, a business acquaintance of Hilk, described the MIT graduate as a brilliant mind who did not easily interact with others.

"He wanted to cure cancer. That was his dream as a youngster," Spearman said. "Everything he worked on was in order and he kept records of everything. He's the type of person. If he's curious about something. He's a one-man show. He's going to be on his own. He doesn't interact with people much."

Hilk's cause of death has not yet been determined. Police said he appeared to have been dead for some time when he was found.

Hilk's father told the ABC 7 Chicago I-Team later Thursday that "the police and fire department of Chicago have been very professional," but would not share any additional information about his son.

He said he has not asked authorities about what was found in the apartment.

The FBI also responded to the building. A spokeswoman for the bureau said agents were assisting local law enforcement, and there is currently no known threat to public safety.

Elliotte Pomerich lives nearby and expressed her concern.

"It's definitely scary; at first I was like maybe I should call my friends and sleep there; I don't know if I want to be right next to potentially a murderer that's on the loose or even a bomb that hasn't gone off yet," she said. "I'm new to the area."

"It's obviously very disturbing," Glotzer said. "I want to say that I'm totally shocked. But, unfortunately, I think in this world, in this political climate, these things can happen anywhere."

He went on to say he's a little concerned about why police didn't have the intelligence to preempt whatever was going on.

"But I support the police and them trying to get ahead of these things," Glotzer said.

The Bureau of Alcohol, Tobacco, Firearms and Explosives in Chicago is not involved in the investigation into the explosives, as the FBI is handling it.