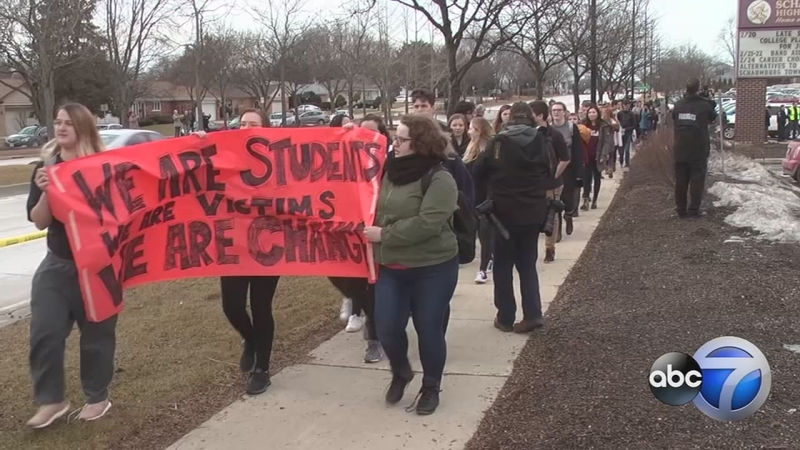 Students in Chicago and the suburbs walked out of class Wednesday in solidarity with the survivors of the Parkland, Fla., school shooting, who are holding meetings with Florida lawmakers about gun control.

About 1,200 students walked out of Schaumburg High School, about two-thirds of the student body, district officials said. They chanted "Protect kids, not guns," holding signs that read things such as #NeverAgain. Student organizers Zahra Khan and Ryan Sorge, among those who put the word out on social media, initially expected between 50 and 100 students.

Township High School District 211 officials said they could not support the walk out, but wanted to ensure its students could safely speak their minds. 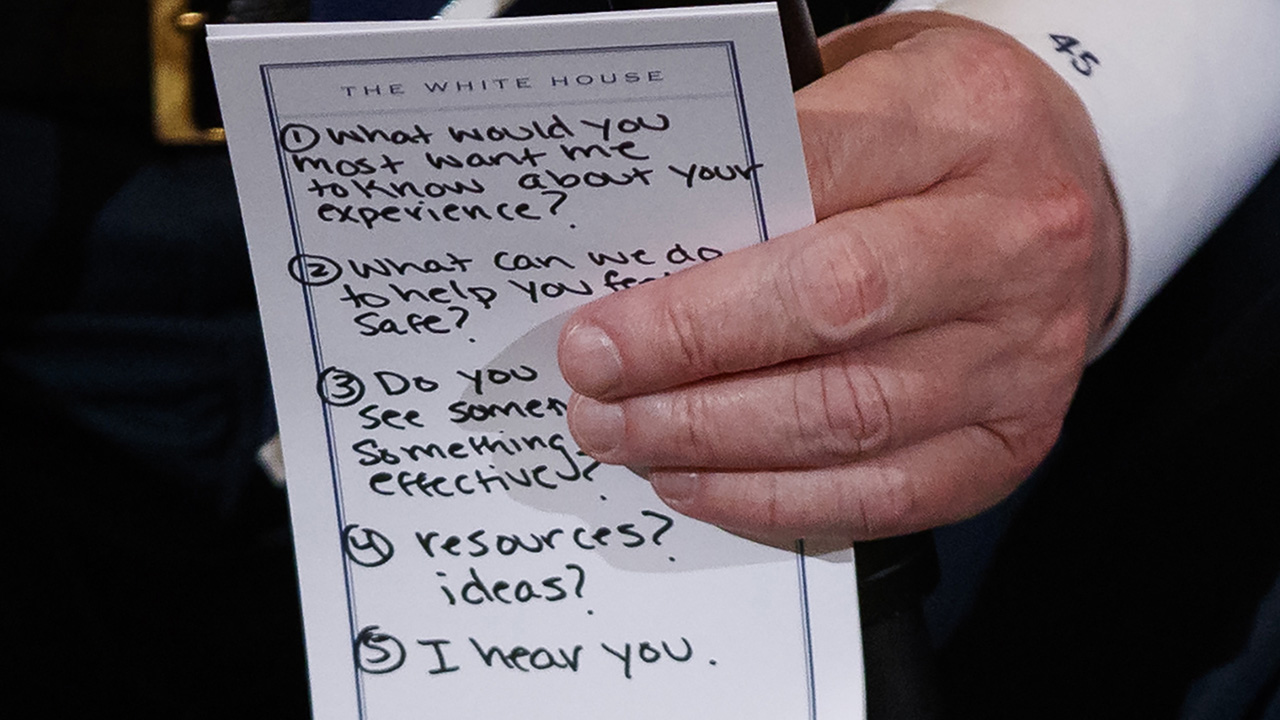 'I hear you': What Trump's note said during Fla. victim meeting
President Donald Trump held a note seemingly reminding him to say "I hear you" during a Wednesday afternoon listening session with Parkland students and others impacted by gun violence.

"As educators, our role is to help develop young people who can fully participate in our democracy. Our role today was to ensure that students had a safe forum for expressing their voices in solidarity with other students," said the district in an emailed statement.

The school had extra security and police help supervise the crowd, which filled the sidewalks in front of the high school for nearly half an hour.

Senior Mina Mazeikis said she is proud of her classmates, and said they've already begun taking the next steps in this movement.

"We are encouraging them to vote. We have been setting up places in the school that they can register. We plan on contacting our representatives," Mazeikis said.

Students at Oak Park and River Forest High School walked out of class on Wednesday in solidarity with Parkland shooting survivors.

"It is really meaningful for us to show that we have a voice. The youth is engaged in what is happening and we can truly make a difference," said Maciej Ezumal, an OPRF student.

In a statement, OPRF officials also said they couldn't support the walk, but "our goal is not to stop students from walking out. They have a right to peacefully protest. Our goal is to ensure that they are kept safe in the process. If students in your classes walk out, please allow them to exit peacefully ... The walkout is scheduled to take place during fifth period; sixth period teachers, you should take attendance as usual at the beginning of the period and mark any missing students absent."

Survivors from Marjory Stoneman Douglas High School in Parkland have been active in the week since the shooting -- holding rallies, being interviewed by national media and organizing a bus trip to the Florida State Capitol to meet with lawmakers. Seventeen people were killed in the Parkland shooting.

Students at other schools in Florida and across the United States have held rallies to show support.

In Chicago's Bronzeville neighborhood, students at the Youth Connection Leadership Academy left school early on Wednesday to not only support Parkland students, but also bring attention to the violence in Chicago.

"We will stand with you for the fight for gun reform," one student said.

Not all schools were supportive of student walkouts. Some students were threatened with harsh punishments for participating.

The Needville Independent School District in Texas issued a warning Tuesday that anyone who participated in a walkout or other political protest would be suspended for three days.

"Life is all about choices and every choice has a consequence whether it be positive or negative. We will discipline no matter if it is one, fifty, or five hundred students involved. All will be suspended for 3 days and parent notes will not alleviate the discipline," Superintendent Curtis Rhodes said in a statement posted on the Needville High School Facebook page.

Rhodes said the Houston-area district would not tolerate any protests or demonstrations during school hours.

"A school is a place to learn and grow educationally, emotionally and morally. A disruption of the school will not be tolerated," he said.

The letter was posted on the same day that a 14-year-old was arrested at Needville Junior High School and charged with making a terroristic threat.

A school district in Waukesha, Wisconsin, sent a letter to parents telling them that the school district is not involved in a walkout that is scheduled for March 14 and that teachers and students would not be excused if they participate.
"Participation in a walkout is disruptive and against school regulations, and will subject students to disciplinary measures," Superintendent Todd Gray said in the letter.

In a follow-up statement on Wednesday, Gray said the original letter was designed to let parents know that the walkout next month was planned by an outside group with no connection to the school.