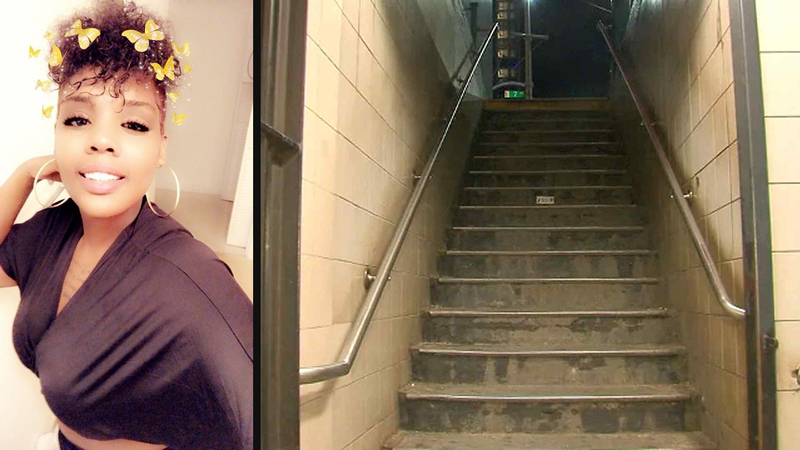 MANHATTAN -- A young mother has died after falling down stairs at a Manhattan subway station while holding her 1-year-old daughter in a stroller.

Malaysia Goodson, of Stamford, Connecticut, fell down the stairs at a midtown Manhattan station at around 8 p.m. Monday, police said.

Goodson was unconscious when police arrived. She was taken to a hospital, where she was pronounced dead. Her child was unharmed.

Goodson's brother, 23-year-old Dieshe Goodson, told Eyewitness News that his little sister was like a twin and that she "died trying to protect her baby."

The baby of their four siblings, Malaysia "always watched out for people," he said.

"She was very protective," he said. "I'm going to be honest, I don't know what to do. She was my best friend."

A young mother carrying baby fatally fell down a Manhattan subway station's stairs, and now her brother is speaking out.

It was not immediately clear whether the 22-year-old Goodson had a medical issue that precipitated her death or whether she died from impact. The city's medical examiner will determine the cause of death.

The baby is now in the custody of her father and grandfather.

The 7th Avenue/53rd Street station, which services the B, D and E lines, does not have an elevator, according to the New York Times.

Only about a quarter of New York City's 472 subway stations have elevators, and the elevators that do exist are often out of service. Parents and caregivers who ride the subways with young children become adept at carrying a stroller and child up and down the stairs. Bystanders will often pitch in to help, but not always.

Shams Tarek, an MTA spokesman, said the Seventh Avenue B-D-E station where Goodson fell does have escalators. Parents are generally advised not to ride escalators with strollers, however.

The lack of elevators makes it difficult for people in wheelchairs to use New York's subway system, and disability-rights activists have staged frequent protests over the issue.

The lack of accessibility in our subways is literally killing people. I am heartbroken by this tragedy, and am keeping this family in my thoughts. NYC must do more for families and the disabled. https://t.co/X2w91JdKtD

Andy Byford, who was appointed the MTA's head of the subway system last year after running the Toronto Transit Commission, has set a goal of adding enough elevators to the system that after five years, no rider will be more than two stops away from an accessible station.