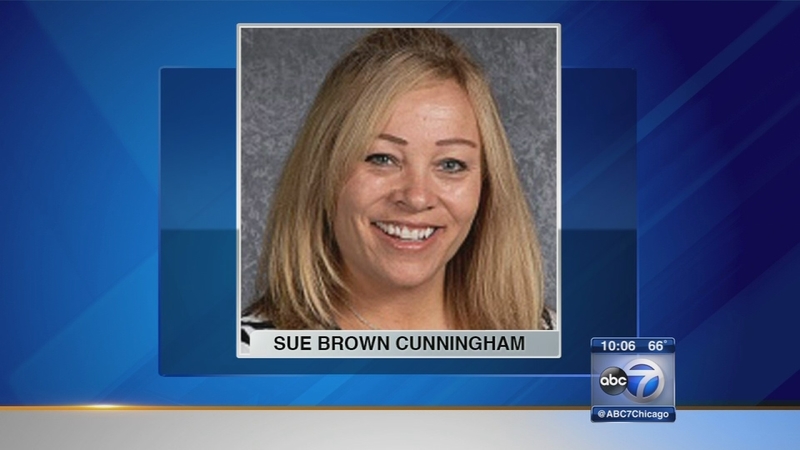 PLAINFIELD, Ill. (WLS) -- Students and staff at Plainfield North High School are mourning the death of Sue Cunningham, a teacher who was stabbed in her home Tuesday night.

Police say the suspect, her husband, was then hit and killed in traffic along I-55.

Sue and her new husband Craig Cunningham lived together with their blended family in Plainfield. The 47-year-old high school teacher had just remarried over a year ago. Her longtime friend and hair dresser Giovanni Rizzo says Sue seemed very happy.

"From the time she met him when she was in my chair, she always had a smile on her face," Rizzo said.

But on Tuesday night, their lives took a tragic turn. While responding to a neighbor's call for a well-being check, police found Sue stabbed multiple times. Police said Craig told a family member he had killed his wife and was going to kill himself. Two hours later, police say he did just that by walking out into traffic on I-55.

"We did find a knife in a vehicle on interstate. Obviously, there's still some testing going on, but the knife did have blood on it," said Chief John Konopek, Plainfield Police Dept.

Plainfield police say that a half hour before Sue was found, she had called police asking for something called a stand-by, or an officer to escort her into her home. She decided against it and never told police she was going in alone.

"She just said that she was having some domestic issues with him and she felt intimated by him, and you know, just kind of asking her options as far as the police coming there," Konopek said.

Sue was killed just months after she was diagnosed with cancer. She had been on medical leave this school year from her job as a physical education and health teacher at Plainfield North High School, where she had taught since 2006. Before that, she taught at Plainfield Central from 2002-2006.

Sue had just visited Plainfield North on Monday, where she told students she was feeling well and hoping to return to school next year.

"She cared about the students, made a personal connection with them, if they had a problem, they could always go to her with issues," said Principal Raymond Epperson, Plainfield North High School.

Plainfield North's principal said all students were informed of the tragedy at the same time by their teachers reading a prepared statement. Extra counselors were available Wednesday for students who may need to talk to an adult.

Sue Cunningham is survived by two children; her husband Craig had three children.