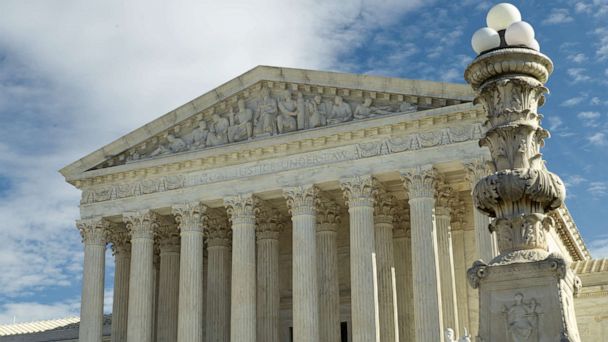 The U.S. Supreme Court on Monday will embark on an extraordinary experiment in judicial transparency, livestreaming its first-ever telephonic oral argument, a high-stakes endeavor prompted by the historic disruption to court operations during the coronavirus pandemic.

Millions of homebound Americans will for the first time be able to experience the nine justices together at work -- a virtual civics lesson on an entire branch of U.S. government that conducts most of its work out of the public eye.

It's also the first opportunity for a sitting American president -- one who is party to cases before the court -- to tune in live and potentially respond via Twitter.

"The court has shown more adaptation than we're used to seeing by a long shot," said Tom Goldstein, a veteran Supreme Court litigator and founder of SCOTUSblog.com, who credits Chief Justice John Roberts with the new approach.

Public health guidelines and social distancing requirements forced the court to indefinitely postpone 21 cases scheduled for arguments in March and April. All of the cases had been expected to be decided by the end of June.

Tune into ABC at 1 p.m. ET and ABC News Live at 4 p.m. ET every weekday for special coverage of the novel coronavirus with the full ABC News team, including the latest news, context and analysis.

Urgent deadlines in several cases, including President Donald Trump's appeal of subpoenas for his financial records -- which expire at the end of the year -- required the court to devise a new way of doing business in the near term.

"I'm guessing they see this lasting a while, given that several members of the court are part of vulnerable populations given their age," Goldstein said.

"No more judicial handshakes. No more lunches together. No more taking the bench together," said Evan Young, a former clerk to Justice Antonin Scalia. "Increasing the isolation of judges who are already pretty isolated may be, or is a big change."

Each justice and opposing counsel will dial in to a telephone conference line, unable to see each other, according to guidelines released by the court. After the marshal gavels in and opening statements are made, the justices will pose questions in order of seniority, according to the court.

"You can't see facial expressions. You can't see body language. You can't pick up on physical cues," said Joe Palmore, co-chair of the Supreme Court practice at Washington, D.C. firm Morrison and Foerster, who has argued 12 cases before the high court.

"The argument will probably sound a little more formal and the advocates will probably have more time to answer questions without interruption," Palmore said.

In May, the court is scheduled to hear 10 oral arguments by telephone, including timely and controversial cases on the Affordable Care Act's contraception mandate, so-called "faithless electors" to the Electoral College and subpoenas for Trump's financial records.

During in-person arguments, the justices often conduct spirited, if sometimes messy, debate with counsel and each other in an effort to tease out ideas and influence thinking on the case. It's the first and only time they discuss a case before they vote.

Legal experts said they didn't expect the new format to substantively impact outcomes in the cases, which are largely informed by the written briefs, but could create new challenges for less experienced Supreme Court litigators.

"There could, however, be some 'home field advantage' for repeat players before the Supreme Court," said JP Schnapper-Casteras, a constitutional lawyer and former special counsel for Supreme Court advocacy at the NAACP Legal Defense Fund. "They're already comfortable interacting with the justices and recognize their voices audibly."

Two veteran female lawyers will be the first to face off before the U.S. Supreme Court via telephone on May 4, when it hears a case on trademark law. Lisa Blatt, a litigator with the Washington, D.C. firm Williams and Connolly, will argue against Assistant to the U.S. Solicitor General Erica Ross.

The functionality of the court's technological set up will also be closely watched.

Last month, when the U.S. Court of Appeals for the D.C. Circuit Court held its first telephonic oral arguments, one judge's line dropped in the middle of her questioning. Another judge was later disconnected and had trouble rejoining the call for several minutes.

"How it goes technologically could have a significant consequence for what it is they decide to do when things return to semi-normal," said Goldstein.

Will the Supreme Court continue to livestream audio of proceedings even after the pandemic? The answer could largely depend on how the public responds, experts said.

"You're going to have that real-time response and the biggest concern is that you don't want justices playing to that view rather than a purely legal exercise," said Carrie Severino, a former clerk to Justice Clarence Thomas and chief counsel at the Judicial Crisis Network, a conservative advocacy group.

The chief justice has consistently raised concern about real-time media exposure -- through cameras in the courtroom or live audio feeds -- potentially harming the court's reputation and ability to stay above partisan debate. Currently, the court only releases audio recordings of oral arguments on a weekly basis.

The biggest test of the new format may come on May 12 when the court hears the president's appeal of three subpoenas seeking financial records.

"The president is clearly very invested in these cases, so I suspect he'll listen in for at least some of them," said ABC News Supreme Court analyst Kate Shaw, co-host of the Strict Scrutiny podcast and professor at Cardozo Law School.

"And if he chooses to weigh in via Twitter, as he did during his impeachment, we could be in the entirely unprecedented position of the tweets themselves becoming a part of the oral argument," Shaw said.

Trump has previously lashed out at Justices Sonia Sotomayor and Ginsburg demanding that they recuse themselves from cases involving him. He has also publicly clashed with the chief justice, whom he once called a "disaster."

"High profile, prominent interventions into public discussion of the oral arguments while it's going on will cause the justices to blanch," said Goldstein. "I can only imagine the president's lawyers are going to make every effort to steal his telephone."

Lin said it's likely the livestreaming will only be temporary.

"These are changes they're undertaking right now because they have to," he said. "I won't be surprised that they'll be eager to return to what the status quo was."

Advocates for greater transparency are hopeful that the livestreaming experiment during this pandemic will actually soothe the justices' concerns about live audio.

"I think the public will be really pleased with what it hears. It will hear part of its government getting its work done under difficult circumstances," said Palmore.

Schnapper-Casteras said he's hopeful pressure from the public and from Congress solidify the change.

"It's going to be hard to put the genie back in the bottle when it comes to live audio," he said. "I think the justices will see that we can deal with this, that these attorneys are members of the bar, these are professionals, whether or not it's on the internet, they are going to make the same type of argument."

What to know about the coronavirus: