At about 9:30 p.m., police said the 23-year-old woman was standing in line for food when the man groped her. She left the line and went to a port-a-potty near Gate R and before she could lock the hatch, the man sexually assaulted her.

Surveillance images of a man suspected of sexually assaulting a woman during a Foo Fighters concert at Wrigley Field.

On Monday, Julian Green, a spokesman for the Chicago Cubs, said in a statement: "We were notified of an assault of a female guest and immediately contacted Chicago Police during last night's event at Wrigley Field. We are using every available resource to help authorities identify and apprehend the suspect and are working with CPD to address the matter quickly. We are encouraging anyone who may have information to please contact police."

Monday night, the Foo Fighters played their second Chicago show at Wrigley Field for their Concrete and Gold World Tour.

Extra security was in place for the Monday night show, specifically around the port-a-potty areas.

Anyone with information on the suspect is asked to call Area North Bureau of Detectives at (312) 744-8261.
Report a correction or typo
Related topics:
chicagolakeviewwrigleyvilleconcertlive musicwrigley fieldsexual assault
Copyright © 2021 WLS-TV. All Rights Reserved.
RELATED 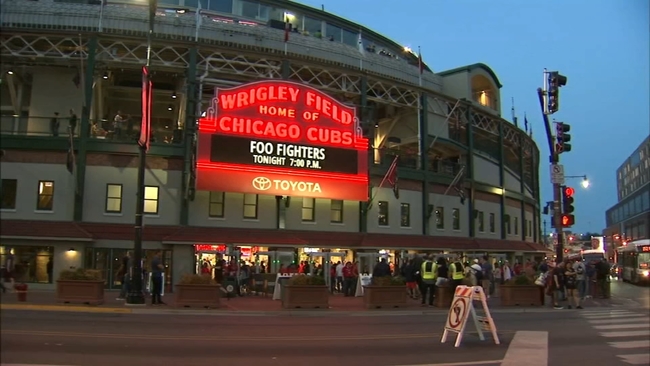