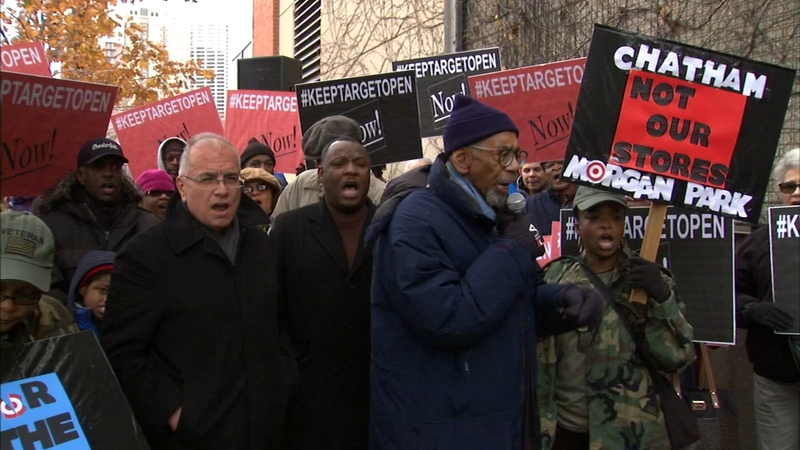 Group rallies to save 2 South Side Target stores

CHICAGO (WLS) -- A group rallied on Monday in an effort to save two Target stores on Chicago's South Side. Target recently announced plans to close stores in the Morgan Park and Chatham neighborhoods.

"We are demanding that Target rescind its decision," said U.S. Rep. Bobby Rush.

Rush is threatening a Black Friday boycott if Target does not reverse its decision to close two of its South Side stores. The retailer says multiple years of decline and under performance is why it is shutting down it's Chatham and Morgan Park locations.

"It's not the fault of the community," Rush said. "It's their fault because they have ghettoized the Targets in our community."

Rush doesn't buy the reasoning of underperformance, and neither does customer Deborah Burns, who shops at the Chatham store.

"I go in the morning, I go in the afternoon, I go on the weekends. I go all the time and there's always lines there," she said.

However, the Chatham location's parking lot was half empty on Monday. Some loyal customers see the reality of the situation.

"I understand corporate America. They are a for-profit, and if it's not making a profit, they have to close it. They are not here to lose money," customer Sarah Abdelal said.

Mayor Rahm Emanuel has offered Target millions of dollars in TIFF money to keep the stores open and he signed an executive order denying TIFF funds to developers if one of their large tenants plans to close stores in different part of the city.

"If you look at all the retail closings in the last decade, it comes down to not having enough traffic to support that location," Hottovy said.