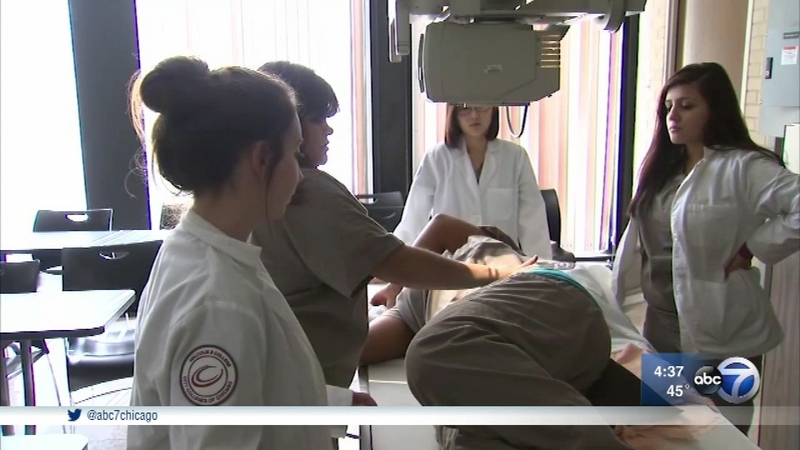 CHICAGO (WLS) -- A stunning drop in nursing students at City Colleges of Chicago is pushing union faculty members to address the college board about whether consolidating programs, like the nursing department, works.

"We are calling on them to reconsider and look critically at all consolidations because they are bad for Chicago," said Tony Johnston, the president of the Cook County College Teachers Union. "We realize nursing can't be put in every campus. It wasn't before, but there can be a better distribution of educational resources throughout the city."

The City Colleges of Chicago (CCC) nursing program used to be located at six college locations: Olive-Harvey, Richard J. Daley, Harry S. Truman, Kennedy-King, Wilbur Wright, and Malcolm X. But the college board decided years ago to consolidate the programs into one located at Malcolm X College. Since the consolidation, the teachers union president says nursing enrollment dropped from about 1,500 to 330 current students.

The CCC's chancellor, on the job for nine months, said the decision to consolidate the nursing program addressed educational issues, including cutting programs on the brink of losing accreditation. Instead, Chancellor Juan Salgado said the current program is a quality, competitive one to be proud of across the board.

"City Colleges created the Centers of Excellence to support the incredible progress our colleges are making to provide every student with a high quality education that prepares them for careers in in-demand fields like nursing," Salgado said. "The City Colleges nursing program now has a 94 percent pass rate on the national nursing exam, strong employer connections and operates in a state-of-the-art facility. As Chancellor, I will look for ways to grow quality programs."

But the union president argues it's too difficult for students from all over the city to commute to one nursing location. Ryan Okholm is one of those students. Okholm, a Truman College student, says he walks to class in 20 minutes. In the fall, however, he plans to attend the nursing program at Malcolm X, and that means his commute will triple. He says he'll have to ride the train or take the bus for more than an hour.

"It is a real burden to have to travel that far to get to your program, on top of the sacrifices of time and finances you're already making," said Okholm, a student who attended Thursday's board meeting. "It takes a huge added bite out of my week to try and balance school and work."

Union faculty members who have been in the nursing department during the consolidation agree that students face travel challenges. Faculty member Tammy Brand was once a Kennedy-King nursing student herself, walking just a few blocks to attend classes. Today, she wouldn't be able to have that convenience.

"Not being able to go to school in your community makes a difference and that was something that was available to me," said Brand, a nursing faculty member who said she walked two blocks to her school in the Englewood neighborhood. "I walked to Kennedy King."

And a fellow faculty member agreed. Although the new state-of-the-art nursing facility at Malcolm X was much needed, associate professor Brenda Jones said it's time to think about students' needs too. "It's time to really get back to what the mission is, the mission of the City Colleges. And the mission is to make it accessible, affordable," Jones said.

"We have to build from where we are at today - and where we're at today is still a really good place," Salgado said. "More relevant programs, high pace rates in healthcare and nursing, and an opportunity to grow."

For now, however, Okholm will have to endure a commute to accomplish his goals. No satellite programs are officially happening. Even so, Okholm is moving forward with a profession he's excited to begin: "I'm looking to nursing to find a way to be part of people's lives in a more meaningful way."
Report a correction or typo
Copyright © 2021 WLS-TV. All Rights Reserved.
TOP STORIES
FOP pres. posts video after ordered not to talk about vaccine mandate
Man, 55, shot in Wicker Park amid robbery attempt near 6 corners
Mom delivers 14 lb. baby after suffering 19 miscarriages
Heaviest pumpkin in US disqualified for crack
State trooper hit by DUI driver on I-90, police say
Pritzkers made $5.1M last year, tax records show
Pritzker delays vaccine deadline for some state workers
Show More
Robert Durst hospitalized with COVID-19, his lawyer says
COVID tops cause of death for police for past 2 years
Chicago's 'must stop' Mexican restaurant is more than tacos
Chicago Weather: Cool, breezy Saturday
Chicago Sky take 2-1 lead over Phoenix Mercury in WNBA Finals
More TOP STORIES News