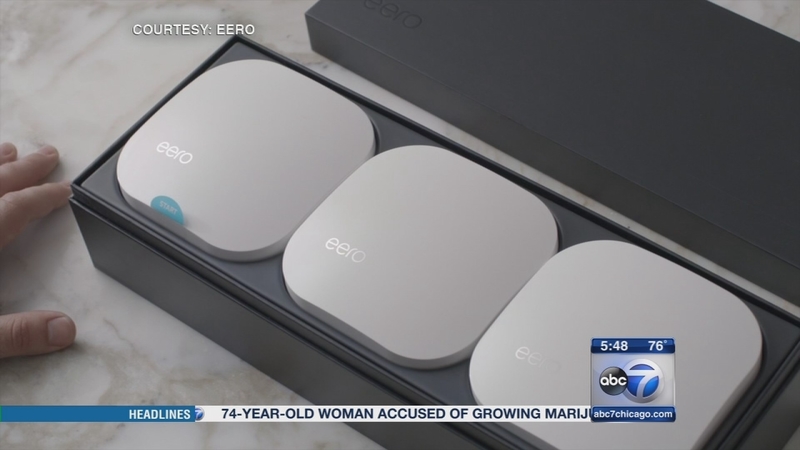 Are you tired of internet dead spots in your house? Kids complaining the connection is lagging all the time?

The problem is today we have more devices connected in our house than one router can handle. So a Chicago native decided to solve that problem and found there's quite a demand for better Wi-Fi.

Nick Weaver is the CEO and co-founder of Eero. The 28-year-old entrepreneur is eager to show off his invention that is finally hitting store shelves.

"I've been the guy who had to fix the internet for my friends family just about my entire life just a couple of years ago, launched company called Eero," Weaver said.

The promotional video for Eero touts it as the first complete Wi-Fi system for your home, which on average now has more than eight devices connected.

"Everything in our home runs on internet, whether it's content, audio, video," Weaver said. "This product is about taking the technology we use to run Wi-Fi for big corporate installations bring it down to price point simplicity for mainstream consumers."

With an engineering degree from Stanford, and frustrated he says with dead spots in his own apartment, Weaver set out two years ago to find a better solution than the existing Wi-Fi boosters.

"With boosters or Wi-Fi extenders, typically they create separate network names. And with Eero, you'll just have one network name, so you don't ever have to keep switching networks on your device," Weaver said.

But that's not all Weaver designed. Eero is also tapping into the growing demand for parental controls. With the family profile, it allows you to decide when to turn off the internet.

"You can set up rule for your kids' bed time," Weaver said. "Sunday to Thursday shut off at 8 p.m., turn back on at 6 a.m., giving you full control over the internet in your house."

Consumer Reports just tested the Eero and said its signal is very impressive, even at the farthest test spot. However, it can pretty pricey depending on how many units you need. One unit covers about a thousand square feet at a cost of $200, and $500 for three units. Clearly there's a demand. It sold 25,000 units in just two weeks after its debut. You can find it at Best Buy or Amazon.
Related topics:
technologywi fi
Copyright © 2021 WLS-TV. All Rights Reserved.
TOP STORIES
Eviction moratoriums ending: What renters need to know
Cook Co. expected to issue mask guidelines
Thousands flock to Lollapalooza day 1 despite COVID concerns
Las Vegas to mask up indoors again after Nevada adopts COVID-19 rule
Bulls select Illini star Dosunmu with 38th pick in draft
Federal workers required to get vaccinated; military may be next
Billionaire founder of electric truck manufacturer charged with fraud
Show More
Chicago Weather: Sunny, mild Friday
Al Qaeda launches new campaign for lone wolf terrorist attacks in US
Fiesta Del Sol kicks off in Pilsen with fun, food, free vaccines
'Arthur' to end at PBS Kids after 25 years
Chicago youth groups performing at Lollapalooza
More TOP STORIES News