Teen bullied, beaten and threatened with a gun in Facebook video 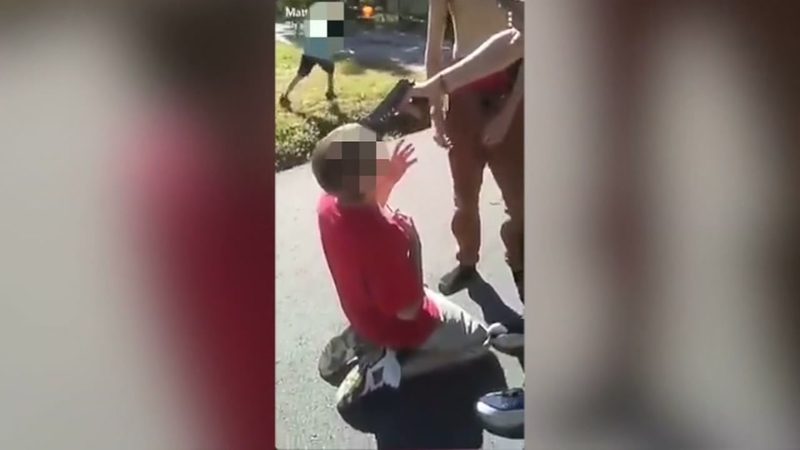 Teen beaten, threatened with a gun on camera

INDEPENDENCE, Mo. -- A video posted to Facebook shows some teens pointing a gun at a 13-year-old boy, and then punching him.

Now, three teens are in police custody in connection with the incident.

Emily didn't know why her son, Darren, came home with bruises on his face Saturday.

She didn't get answers until her youngest son showed her the shocking video.

"His face was bruised," mother Emily told WDAF-TV. "I was hurt. I was angry. I was crying. I was mad. I was upset because he didn't defend himself."

The video shows her son Darren down on his knees, while the other children are yelling at him to kiss their feet.

They started using racial slurs, then suddenly, someone pulls out a gun and holds it against Darren's head.

Now, Emily wants those responsible to be held accountable for their actions.

Emily went to police Monday and says at first, they didn't seem concerned about what happened to her son.

"He just really said that they're minors, there's not a lot that happens to them," Emily said. "They have to do community service. There's not a lot. I should just keep Darren away from over there and keep him at home."

But Tuesday, Emily went back to police looking for someone to take responsibility.

After the gun was pulled, another person threw punches at Darren.

It only stopped when Darren was finally able to walk away.

"I'm a parent and a mom so I do feel bad for them to an extent," Emily said. "I do think that all kids should suffer the consequences."

Emily says her sons have been victims of violence before. And she wants other parents to step up.

"I think a lot of them don't have parents -- that care. Not that they don't have them, but just aren't around or don't care."