Tents ice over as freezing weather plagues migrants near US border 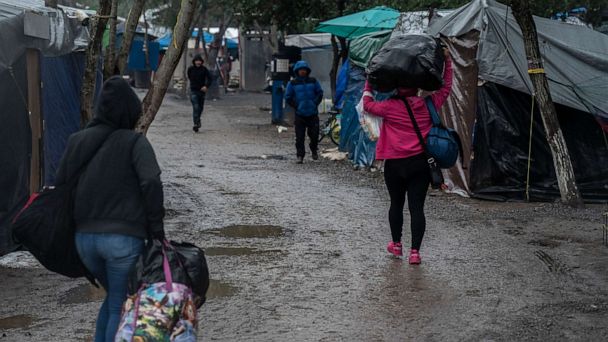 As snow and ice slam much of the southern United States, migrant communities along the U.S.-Mexico border are enduring freezing temperatures with scarce resources.

At a migrant camp in Matamoros, Mexico, directly across the border from Brownsville, Texas, tents made out of blue tarp have iced over as a winter blast brought freezing temperatures and icy rain to the region this week. Water used for cooking and bathing has also frozen.


Many of those living at the camp are waiting in Mexico while their asylum applications are processed in the U.S., under the Trump administration's so-called "Remain in Mexico" policy. President Joe Biden is expected to start processing and admitting migrants forced to wait in Mexico under the "Migrant Protection Protocols" this week.

One resident at the camp, a Honduran woman named Karen, told ABC News she has been at this camp for over a year now with her two sons, ages 10 and 11.

"By the grace of the lord, we are alive," she said Monday in Spanish, after the camp woke up to frozen tents.

She is worried her children will get sick because of the weather, as they experienced snow for the first time.


Power has been mostly out for the past two days in the city, and there is no electricity at the camp. Some volunteers donated coal so that residents could build bonfires Monday night.

On Tuesday, several migrants ABC News spoke with started crying as they recounted their experience fleeing their home country and living in the camp during the extreme weather.

"The truth is the weather has been pretty difficult because it got down to minus 11 degrees [Celsius] here and we couldn't stand it, but the truth is that God is great because we are still here, we keep fighting," Walter, a 31-year-old Honduran who has been at the camp for nearly a year, told ABC News in Spanish.

It's been difficult to bathe during the frigid temperatures, he said.


Jonathan Gutierrez, of Nicaragua, and Blanca Hurrutia, of Honduras, have a 3-week-old boy together.

"Everything is a struggle here because of the conditions," Gutierrez told ABC News in Spanish.

"The baby is going to turn a month old and I'm 23 years old and I can barely stand it, what about him? You can imagine all that we've suffered here," he said, crying.

"It's difficult now with the low temperatures, even the tents are covered in ice," Hurrutia, 19, told ABC News. "It's hard because it's so cold."