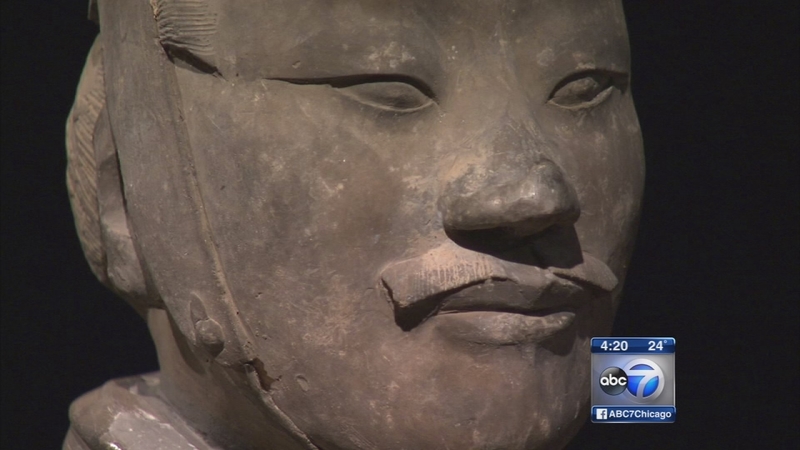 CHICAGO (WLS) -- When the first emperor of China died over 2,000 years ago, he was buried with 8,000 terracotta warriors. Now, 10 members of that large army are in Chicago at the Field Museum.

The terracotta warriors are not your typical military force. They were sculpted of clay and fired at high temperature to give them an almost eternal hitch in this ancient Chinese army.

"The army was meant to protect the emperor in the afterlife. So the first emperor of China, Qin Shihuangdi, died and wanted to rule in the afterlife so he wanted an army to protect him," said Tom Skwerski, Field Museum manager of exhibitions.

Emperor Qin Shihuangdi came to power in 221 BC and almost immediately began to build his terracotta army. They were not discovered until 1974 by a farmer digging a well.

"The more they dug, the more they found. So far we estimate there are about 8,000 of these," said Richard Larivier, president of the Field Museum.

The warriors look pretty spectacular now but when they were unearthed, it was all a giant multi-million-piece jigsaw puzzle. Each soldier had to be excavated and restored.

"Almost every one of them had to be re-glued together in order to give us the fabulous figures that we see today," said Dr. Gary Feinman, curator of anthropology.

One thing you can't help notice is the faces of the terracotta warriors. No two alike, they are as varied as the whole human race.

"The hair or the eyes or the facial hair is individual to each of the figures. Imagine doing that for 8,000 different figures," Skwerski said.

The warriors had no idea how long their assignment would be but when you're drafted to guard the emperor, don't plan on going home soon.

"They're still on duty and it'll last a lifetime on into eternity," Skwerski said.

The exhibit runs until next January and there is an extra charge.