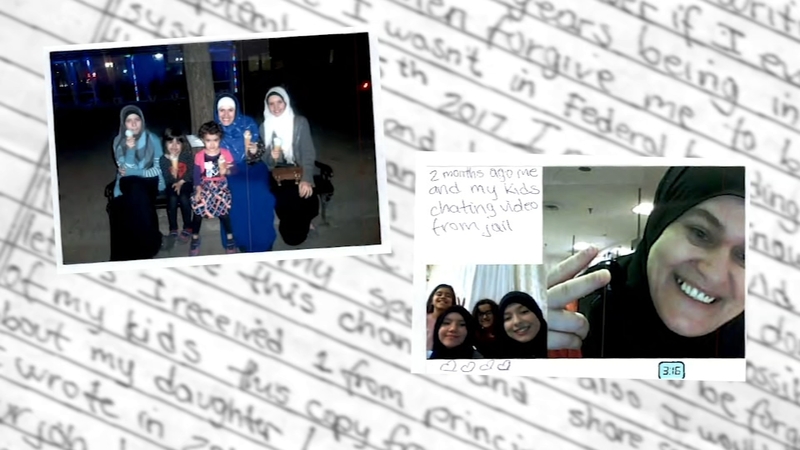 CHICAGO (WLS) -- A northwest suburban mother, jailed for more than three years awaiting trial in a major federal terrorism prosecution, has written an impassioned letter to the judge who is overseeing her case.

The hand-written letter from Mediha Medy Salkicevic, obtained by the I-Team, is replete with photos of jailhouse video conversations with her four children in Schiller Park and desperate stories of survival in Bosnia, where she grew up and fled.

"Im (sic) sorry for my spelling" Salkicevic, 37, writes in the sometimes broken-English letter to U.S. District Judge Catherine Perry in St. Louis where the terrorism case was filed. "I pray before I decide to write letter to you" states the Bosnian Muslim refugee.

She and five others were arrested in February 2015 on charges of conspiracy and providing material support to terrorists, including ISIS and Al-Qaida in Iraq. Investigators say Salkicevic wanted to "bury unbelievers alive" and bring death to infidels.

"I really don't know how system, works" she writes in the latter. "I just want to make sure they don't loose (sic) my name in system, and if is possible to forget about me. I don't want to be forgotten" writes the Schiller Park woman who could face up to 30-years in prison if convicted of sending money and supplies to terrorist fighters overseas.

In the letter, now filed in Salkicevic' s federal case record, she writes a heart-tugging story commencing with her upbringing in war-torn Bosnia in the early 1990's. The letter is aimed at providing a "picture of my family whom get killed by hand of people like what they trying to accuse me they said I was supporting."

From nightmare to lemon drops

She describes her childhood: a father who died when she was 6, a mother who raised her "with no income or pension" going door-to-door soliciting paid chores to support her, three older sisters and a brother.

Then in 1992 came a devastating war in Bosnia, spun from the breakup of Yugoslavia.

"During the war they separated the men from the women" she writes to the judge. "They took my brother promising to bring him back home in 45 minutes...He did not return."

She claims that the day after her brother was taken away, Serbian soldiers came and took her mother as well. "I was left alone with my 14 year old sister. We followed them and watched as they took my mom away. She was not allowed to even look back at us. No one told us where they were taking her."

One of the soldiers vowed to "finish this neighborhood" by throwing her and her siblings down a well, describing her view of a campaign of genocide.

"As the two soldiers walked away, the soldier with the rifle pulled out a pack of lemon drops [candy] and tossed it to us and told us to share it amongst ourselves....not long after they brought my mother back."

According to Salkicevic's letter that soldier "saved us and gave us hope in humanity by giving us lemon drops and our lives."

Her mother would never reveal what happened, she said.

"It is my belief that it's a secret that she is going to take to her grave."

"We never saw our brother alive again. Several years later his body was discovered at a massive grave yard. My mother recognized him by the belt he was wearing a keychain."

"His hands were tied behind his back with metal wire and his head was split in half. We found out that he was shot in the head and at some point, his skull was smashed with a bat or some other weapon."

The backdrop of that short story is to convey a simple message for the jurist overseeing her case, she says, "don't judge someone soley (sic) based on their appearance or where their (sic) from or their religious beliefs."

In the conclusion to Judge Perry she writes: "I wish the world would realize not every Muslim is a terrorist."

Her co-defendants, all Bosnian immigrants, are charged with buying military equipment-including sniper scopes and other tactical gear along with combat uniforms-from surplus stores in Missouri and shipping the gear overseas to fighters in Syria, Iraq and elsewhere.

The I-Team has reported that Salkicevic was working at an O'Hare airport cargo company when she was arrested. She and the other defendants invoked an unusual defense of her actions-stating that they were engaged in a legitimate war and providing aid to forces opposing Syrian strongman Bashar al Assad-just as the U.S. has done.

On Wednesday a defense Motion to Dismiss the case based on that legitimate war theory was denied by Judge Perry. The legitimate war defense will be allowed during trial, according to Wednesday's decision. While a trial date has not been set, now that the motion to dismiss has been denied, the case is expected to move forward more quickly.

Despite Salkicevic's expressed concerns that she not be abandoned in jail, her Chicago attorney Andrea Gambino told the I-Team on Wednesday that she "has not been forgotten." Judge Perry has not responded to the letter, according to Gambino, but the judge did enter it in the court record. "No one has any interest in stalling or delaying the case, least of all Ms. Salkicevic and the other defendants [and their respective attorneys]" she said.
Report a correction or typo
Related topics:
schiller parkterrorismi team
Copyright © 2022 WLS-TV. All Rights Reserved.
I-TEAM
Fight the pandemic burnout
How to spot a fake COVID home test kit
More than $10M of PPE left in the rain in CA county
Chicago's minority drivers more likely to get camera tickets: study
TOP STORIES
Omicron surge hasn't peaked nationwide: US surgeon general
Chicago's south suburbs to get new area code Friday
Aurora Mayor Richard Irvin announces run for IL governor
Woman killed after being pushed in front of NYC subway train
Chicago weekend violence leaves 31 shot, 4 fatally: CPD
Cop who bungled homicide case involving Daley's nephew promoted
Ghislaine Maxwell ends fight to keep names of 8 'John Does' secret
Show More
Chicago sports broadcaster Les Grobstein dies at 69
IL family poised to sue Amazon over deadly warehouse collapse
Expect more worrisome COVID variants after omicron, scientists say
Walgreens, CVS temporarily close some stores as COVID surges
COVID Chicago: Residents appreciate ease of at-home tests
More TOP STORIES News