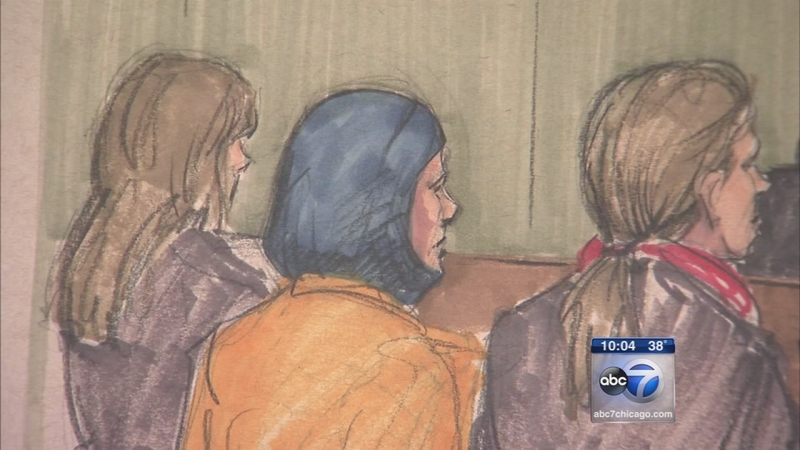 CHICAGO (WLS) -- A suburban mother of four facing terror charges appeared in front of a judge for the first time Saturday.

Mediha Medy Salkicevic, 34, remains in a federal lock-up after being accused in a conspiracy to help ISIS terrorists in Syria out of her Schiller Park home.

Authorities said that although the scheme did not involve targets in the United States, those involved did fund terrorist activities of ISIS.

The west suburban mom is among six Bosnian immigrants accused of helping to fund the overseas activities of ISIS terrorists.

Salkicevic's attorney says her says her client is innocent until proven guilty.

The two Missouri suspects were also charged with conspiring to kill and maim people in a foreign country.

The indictment, unsealed Friday, alleges the conspiracy began no later than May 2013 to donate and collect money from others that was used to buy military weapons and supplies that were shipped by U.S. mail and then smuggled to rebel groups in Syria, Iraq, and elsewhere.

Authorities say Salkicevic, also known as Bosna Mexico, sent a series of $1,000 PayPal payments, which were used to buy a sniper rifle scope, combat boots and uniforms. Money was also sent to support the families of terrorist fighters.

Federal prosecutors say Salkicevic chatted using code words with her co-defendants about the plot on Facebook.

The case will be tried in Missouri, where the military equipment was allegedly purchased.

If found guilty, Salkicevic, who was arrested at her northwest suburban home Friday afternoon, would face up to 30 years in prison. Neighbors are surprised by the arrest.

"I always thought it was a good neighborhood, but I guess you never know who's living around you," said neighbor Artur Wojcik.