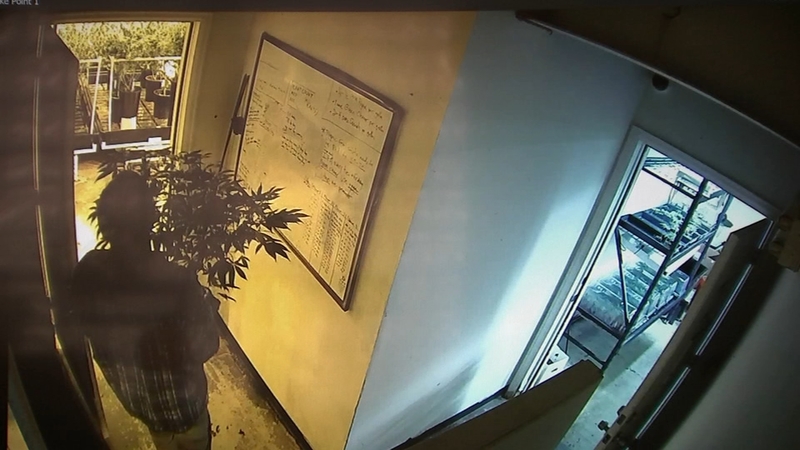 CHICAGO (WLS) -- There is a high stakes reality for Illinois' new marijuana entrepreneurs. It's costing each of them a small fortune but it is something they can't talk about it.

How a dispensary secures its facility is so top secret, marijuana execs told the I-Team state regulators restrict companies from sharing the details.

The reason is a mix of marijuana and money. A lot of both, in the recreational use facilities that opened just last month under a new state law.

Nearly $40 million worth of weed was sold during the first month it was legal.

That is a lot of cash to keep track of.

Just days after opening in Logan Square, a torch-wielding burglar stole about $200,000 from MOCA Modern Cannabis Dispensary. Chicago police said it appears to be an inside job; the suspect used a key card to get in.

A law enforcement source told the I-Team that a dumbwaiter was used to access the vault, and then a torch to break into the safe. The surveillance video was deleted.

The dispensary's owners turned down the I-Team's request for an interview.

"The cannabis industry is dealing with a lot of cash. A duffle bag full of product could be $60,000, $70,000," said Dan O'Sullivan, senior security consultant with Clear Loss Prevention. "It creates a target."

"It's something we don't provide because we don't want anyone to have that access because, you know, it's proprietary to how we operate our business," said Brendan Blume, vice president of store development for Green Thumb Industries which owns and operates nearly 100 dispensaries nationwide, including Rise in Joliet.

Blume said protecting his people, product, customers and cash are top priorities, but that the company doesn't want to share the intricate details of its security plan with the media or public.

Illinois has strict security requirements from seed to sale.

"We have the ability to monitor the movements of the plant. We can monitor the movement of the cash back to the vault, which is part of the requirement," said Johnny Klemme, lead security consultant with Total Harvest Coverage. "After hours, all cannabis product and cash has to be stored in a reinforced vault."

Klemme's company has worked with marijuana businesses in seven states.

Not everyone was happy to see us. At one location an apparent employee attempted to prevent an I-Team photographer from shooting a truck going into a building.

Video surveillance is a key component of the security plan. The systems can cost up to $200,000.

"It's required by the state that everybody have video surveillance," said Chris Jensen, cannabis market manager for March Networks, a firm that provides video security products.

"They have to have panic alarms, glass break sensors, they have to have bulletproof glass in some areas," said Thomas Carnevale, founder and CEO of Umbrella Technologies. "They need to have an on-site security guard at all times."

Security expert Carnevale said there is one area he believes dispensaries are most vulnerable.

"Someone could very easily, with the right expertise and tools, infiltrate an access control system without it being outwardly apparent," he told the I-Team.

We don't know what key card system was being used at MOCA when last month's burglary went down.

"My application was over 400 pages," said Quiwana Bell, COO of Westside Health Authority. Bell is a social equity applicant hoping to open a dispensary in the Austin community.

"It was a very technical application," she said. "There were over 4,000 applications for 75 licenses."

For Bell, and all applicants, the stronger the security plan, the more likely they win one of the coveted spots.

"This is a new industry. A lot of cash is involved with it, so it's something we just have to be more secure about" said marijuana executive Blume.

The reason only cash is accepted in Illinois and in other states is because selling marijuana is still federally illegal. Because of that, federally-regulated banks and credit card companies shy away from getting involved with marijuana businesses.