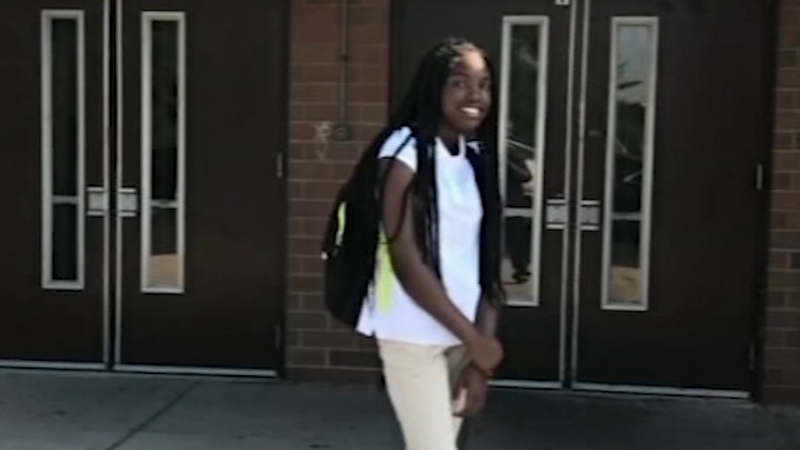 HARVEY, Ill. (WLS) -- The family of a 12-year-old girl killed by a stray bullet in 2019 is pushing for investigators to solve her murder.

Kentayvia Blackful was struck by a bullet in south suburban Harvey when she was in her home.

The Harvey Police Department announced they have two suspects in the murder of Blackful.

"It was one loud noise and then a stop, and we're looking. Next thing you know, shots rang through the house," said Kentnilla Blackful, Kentayvia's mother.

The sixth grader was murdered on her birthday.

"That's when I seen that she was struck in the head," Kentnilla said.

RELATED: 'I hope I made her proud:' Family holds birthday party for Harvey girl killed by stray bullet

Since September of 2019, Kentnilla has been waiting for an arrest, and the family showed up to the city hall Thursday to get answers.

Harvey police believe they can move forward with charging the suspects.

"In my eyes, do I believe we have enough to charge? Certainly," said Commander Joseph John Mosely, Harvey police.

Detectives said they have been talking to the Cook County State's Attorney's Office.

"We called for charges. The state's attorney said we need a gun. Well, this is two years later," Mosely said.

Harvey Police Commander Smith said the two suspects are pointing the finger at each other.

"We have both the suspects saying that the other guy did it, and they won't charge them," Mosely said.

"The State's Attorney is still saying that she's not pressing charges. She does not know which one to charge," Kentnilla said. "I'm not going to stop until they're charged, until we get them arrested for my daughter's murder."