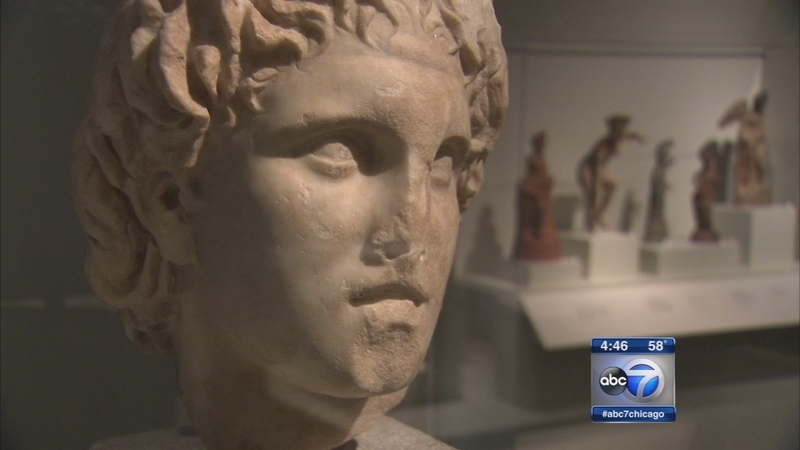 CHICAGO (WLS) -- Greece is often called the cradle of civilization. Now, a new exhibit at the Field Museum is giving us a close look at ancient Greece from its philosophies, its treasures and its people.

It's an exhibit that's about 5,000 years in the making. From the end of the Stone Age up to when modern man ruled Greece, from Agamemnon to Alexander the Great. And the story is told through hundreds of priceless treasures.

"This has over 500 objects that span five thousand years of Greek prehistory and history," said William Parkinson, Field Museum curator of anthropology.

The Field Museum and 20 other museums here and in Greece have put the show together featuring items that have never before been out of Greece.

"I think this teaches us where we come from. So many of our institutions, philosophy, theater. Even the Olympic Games and our system of governing, democracy," said Dr. Susan Neill, Greece exhibit project manager.

The over 500 artifacts are all in remarkable condition. But it's not because they were locked away in some vault somewhere. No, they were buried in graves.

"The majority of these objects come from graves. And I think that in many cases, grave goods give us the best indication of who someone was during their life," Dr. Neill said.

For instance, the wealthy lady of Archontiko from 540 B.C. is another example of "you can't take it with you." And bronze and gold helmets as good as new, worn into eternity by influential soldier politicians. Democracy! It all started here but didn't happen overnight.

"What you learn is that the birth of democracy in classical Athens was the coming together of a long history that started in the Neolithic. It started in the Stone Age and it flourished during the middle of the first millennium B.C.," Parkinson said.

Alexander the Great finally makes his appearance at the exhibit's second to last stop. The last stop is the gift shop - probably another invention of the Greeks.