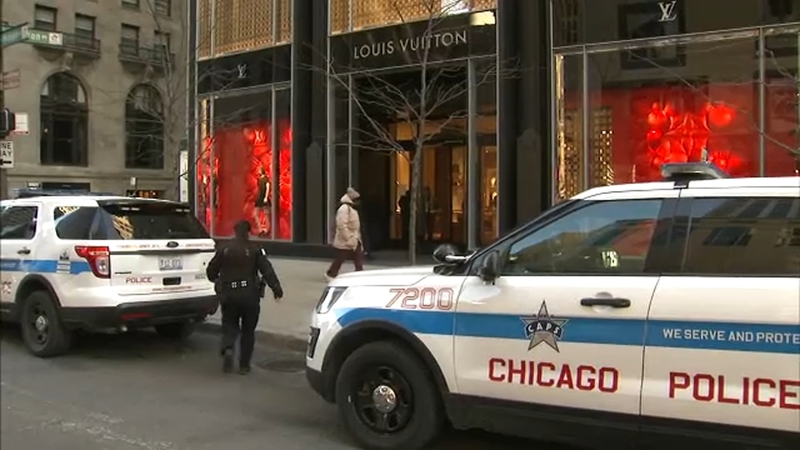 Police were called to the H&M in the 800 block of N Michigan Ave. Thursday around 11:30 a.m. after a group allegedly ran off with store merchandise.

The suspects ran into the nearby Chicago Red Line station, one carrying a garbage bag full of merchandise, police said. The group then allegedly jumped onto the train tracks and bolted north through the tunnel to the Clark and Division station, where officers were waiting on the platform.

Photos released by Chicago police show some of the five suspects being arrested, along with the allegedly stolen goods.

Two of the five offenders haven't been identified because they're juveniles.

But three other 18-year-olds are facing charges in the incident.

Keshaun Vance, Kesean Reese and Alonzo Hall are each facing one count of retail theft more than $300, as well as criminal trespass.

Less than an hour later, police were called to the Louis Vuitton store in the 900 block of N Michigan Ave. Masked suspects, who allegedly claimed to have a weapon, fled with several handbags.
Police tracked those handbags down Lakeshore Drive, finding them inside the getaway car near 32nd and Eberhart.

The sedan was towed, but the robbery suspects are still on the run.

A spokesperson for H&M said the company is working with local authorities to resolve the situation.

"The safety and well-being of both our customers and employees is our top concern," the representative said.

Louis Vuitton Americas declined to comment on the incident.

Police don't believe the two crimes are connected, despite their proximity.

But shoppers said it's alarming these two heists happened in broad daylight and within minutes of each other.

"Awful. It's just terrible," said neighbor Sharon Owens. "I can't believe that in the middle of the day, that would happen."