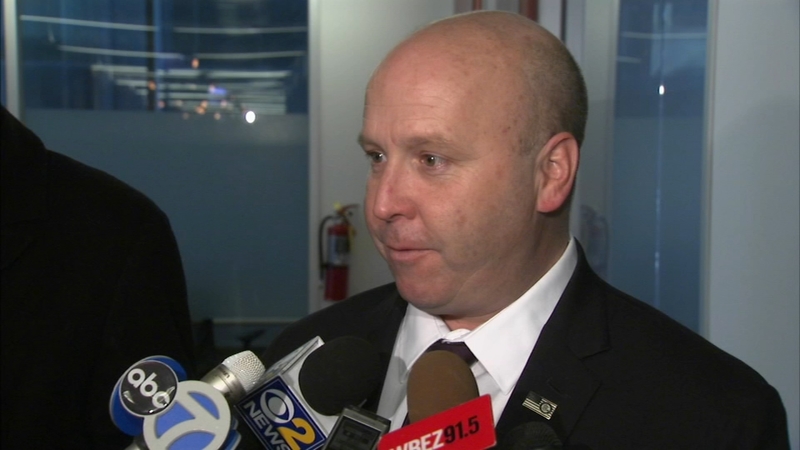 CHICAGO -- A federal judge has sentenced former state Sen. Thomas Cullerton to a year in prison in the $248,000 embezzlement case involving the Teamsters labor union that ended Cullerton's career in Springfield.

U.S. District Judge Robert Gettleman said, "It gives me no pleasure, Mr. Cullerton, to take you away from your family." But prosecutors argued Tuesday that Cullerton thought his elected office entitled him to a do-nothing Teamsters job, and the judge said he took that breach of trust seriously.

He told Cullerton, "We've had far too many public officials appear in this court as felons."

"Every time you took that paycheck from the Teamsters without working for it, you knew that you were doing something wrong," Gettleman said while handing down the sentence.

The judge acknowledged the emotional and financial consequences Cullerton has already faced as a result of the case, including apparent threats. But the judge explained that "the reason people are angry" is because of a "disheartening" amount of public corruption seen by Chicago's federal court.

Before he learned his sentence, Cullerton spoke at length to the judge about his family life and "the amount of online hate speech comments" that attacked him and his wife after his indictment.

As for his job as an organizer for the Teamsters, Cullerton said, "I'm not going to say I didn't take advantage of the situation. I did."

Prosecutors had asked the judge to sentence Cullerton to up to 18 months in prison.

In making their recommendation, they revealed that former Chicago Teamsters boss John T. Coli told them Cullerton was hired for his Teamsters job as a favor to a senator only identified in court records as "Senator A."

"[Cullerton,] who was a state senator at the time of his illegal conduct, clearly realized that he would be able to get away with pocketing this money without doing any work simply because he was an elected official," Assistant U.S. Attorney Amarjeet Bhachu wrote.

The former senator's defense attorney asked for probation and community service, telling the judge that Cullerton now does shift work at a warehouse as he tries to make ends meet and repay the Teamsters.

Cullerton is a member of a family whose political fortunes date back to just before the Great Chicago Fire of 1871. He pleaded guilty to embezzlement back in March, and he admitted he improperly took more than $248,000 from the Teamsters.

Even though he had faced indictment since August 2019, the Villa Park Democrat held onto his seat until last February, resigning just before his attorney revealed his plans to plead guilty.

The charges against Cullerton came just days after Coli pleaded guilty in an extortion case revolving around $325,000 in cash payments he received from Cinespace Chicago Film Studios between 2014 and 2017. Coli also agreed at the time to cooperate with federal prosecutors, despite having bragged years earlier that, "you can cut my fingers off, I wouldn't talk."

Coli has not been sentenced.

Cullerton landed his job as an organizer for Teamsters Joint Council 25 after his former employer, Hostess Brands, shut down in 2012. Coli told prosecutors he arranged for Cullerton's hiring as an organizer "but did not believe the employment was legitimate," according to court filings.

Cullerton was accused of collecting $188,320 in salary, bonuses and cellphone and vehicle allowances from the Teamsters between March 2013 and February 2016, as well as $64,068 in health and pension contributions, while doing little or no work for the labor union. He was also accused of collecting $21,678 in reimbursed medical claims.