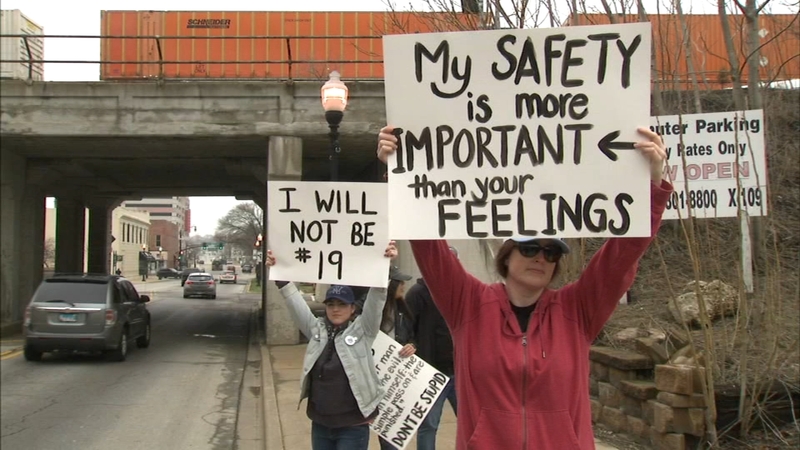 AURORA (WLS) -- Convicted killer Thomas Kokoraleis now calls the city of Aurora home, but community members want the registered sex offender to know that he is not welcome.

"Terrifying knowing that this satanic murderer and rapist was coming here without any real protection to our community. It puts our women and children in direct danger," said protester Dr. Matt Harrington.

Kokoraleis was among four men accused of being part of the 'Ripper Crew', a satanic cult that police believe killed as many as 20 Chicago women in the 1980's.

He was sentenced to life in prison for the slaying of 21-year-old Lorry Ann Borowski, but was released from prison last week.

Lorry's family said they sickened that her killer is now free.

"I think that he should be watched and judged," said Lorry's niece, Annette Borowski.

The 58-year-old ex-con is staying at the Wayside Cross Ministries near downtown Aurora. He is taking part in a residential recovery program that offers a second chance, something Lorry's family said she was never given.

"I don't think that we had that choice," Annette said, "the women wanted to be left alone and live their life."

The mayor of Aurora is pushing for the director of the ministry to relocate the convicted killer, saying it is a risk his city should not have to take.

Wayside Ministry said Kokoraleis is currently under a close watch and cannot leave the property - as he says he is trying to move on with his life.

"I don't think he should have that freedom or even be free," Annette added.

Others in the community cannot stop thinking about the case, worried that a man responsible for killing innocent women now has his life back.

As the city of Aurora continues to wait for the Wayside Ministries to reverse this decision, the ministry said they have increased security at the facility to address safety concerns.