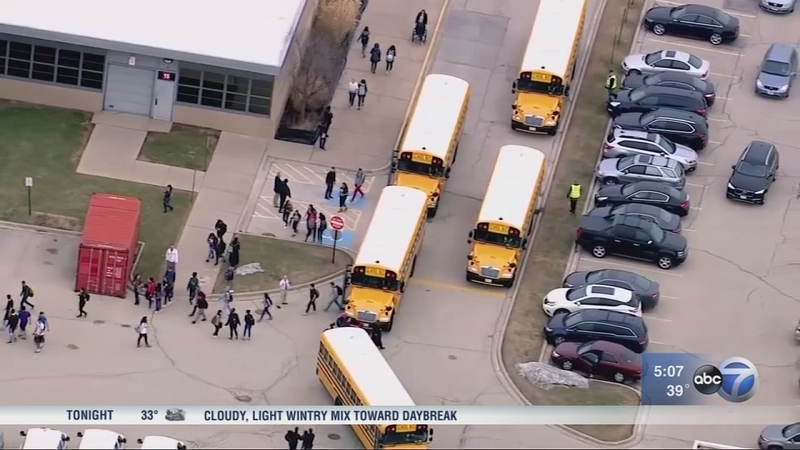 ROSELLE, Ill. (WLS) -- Schools across the country have been busy reacting to threats after the Florida shooting rampage, including in the Chicago area.

Most of the threats are made through social media.

Classes were cancelled at Lake Park High School West Campus in Roselle after a threat was posted on social media.

The schools spokeswoman said the threat was not credible but: "Due to the significant disruption to the school day, it was in the best interest to cancel classes."

Roselle police said there is no credible threat against the school, but classes have been cancelled as a precaution.

There have been a series of school safety concerns this week in the area.

And on Wednesday Niles North High School was evacuated after someone called in a bomb threat.

"There's been social media threats that's been pervasive because anytime there is an incident like this people come out of the woodwork," said Paul Timm with Facility Engineering Associates.

Paul Timm is a security consultant with Facility Engineering Associates. He's seen hoaxes and rumors on social media after the school shooting in Parkland, Florida.

Timm said schools with a Threat Assessment Team can reduce disruptions for students and staff and having students as part of that team is most effective.

"Whatever we can do to appropriately involve students will help for two reasons. First of all students are ahead of us in technology and second of all they generally have a better pulse of what's going on inside the building," said Timm.

While none of the threats mentioned above were credible threats, they did cause disruptions and anxiety.

The suggestion is that schools share as much information as possible, even if they are still working on things, to maybe reduce some of those rumors.
Report a correction or typo
Related topics:
rosellecretenilesmoneela grangehigh schoolschool threat
Copyright © 2021 WLS-TV. All Rights Reserved.
More Videos
From CNN Newsource affiliates
TOP STORIES