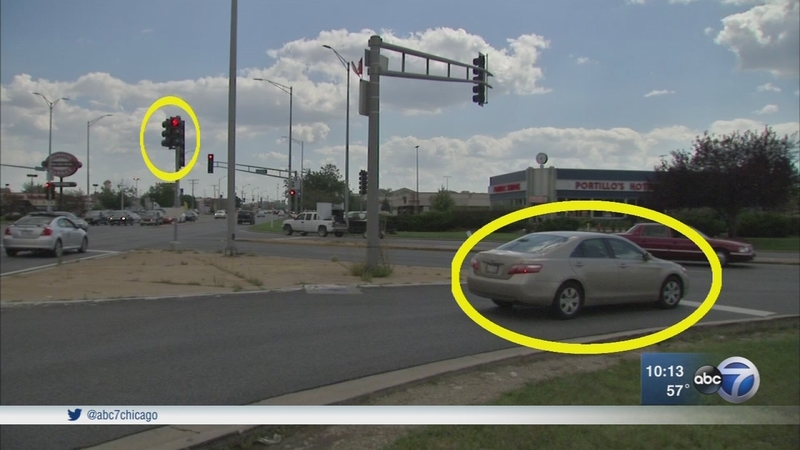 CRESTWOOD, Ill. (WLS) -- Tips have poured in since the ABC7 I-Team and the Chicago Sun-Times first exposed the skyrocketing dollar amounts collected from drivers going mostly right on red in the suburbs. Now there is new red light camera confusion over one intersection in Crestwood.

Jones admits video shows she didn't stop at the intersection but she thinks it's a trap. If you look at the hard right turning lane, there's no designated light for it and when drivers stretch out to look for traffic they can't see the light and get confused.

"They have a light, evidently, but you can't see it. Very deceiving," Jones said.

Jones paid the ticket but she brought the video to her friend Mark Wallace, who also runs the group Abolish Red Light Cameras.

"This is like a conveyor belt to bring cash in," he said.

Wallace is also critical of the busy intersection at southbound Cicero Avenue and Cal Sag Road.

Wallace said when drivers do see the light they may think it is only for traffic heading straight.

"You can see that they are slowing down and proceeding with caution because there is no traffic signal there," Wallace said. "And what is happening is all of those people are racking up fines."

In citation videos you can see driver after driver making the same mistake.

"When I turn right there is no light there," said Ladonna Williams.

At a recent Crestwood red light camera court hearing, there were another 15 complaints.

"I'm angry because I think it should be more clear," said Liz Jones.

"I begged them for mercy," Jeanie Infelise said.

"They dismissed one and I'm paying for the other," said Kenneth O'Brien.

"You don't know that you are doing anything wrong until you get these tickets," Janet Wittenmyer said.

In May, the I-Team and Sun-Times found that in recent years 90 suburbs raked in more than $160 million in red light camera revenue, surpassing City of Chicago totals. Crestwood brought in about $1.5 million since starting its program in 2016.

As for the intersection in question, Village Services Director Bill Graffeo said the village is not taking advantage of a confusing situation.

"There is no confusing situation, the light is plain as day, it is right there," Graffeo said.

Graffeo met the I-Team at the right turn lane in question, where the I-Team asked about what happens when you pull past a line in order to see oncoming traffic.

Graffeo also said a sign was erected about four months ago telling people to stop on red, although it wasn't in some of our red light camera citation videos. He even showed the I-Team his own video where it was torn down.

"Yes, that sign has been knocked down three times on this side," he said.

And why not have a light there so there's no question?

"Because you couldn't, you'd have to have it across the street so you can see it," he said.

Graffeo also rejected the idea that the light had to be made clearer because some motorists had questions.

"It is clear, it is crystal clear," he said.

But many drivers disagree.

"Either you all need to put an arrow at that light or something else needs to be done," Ladonna Williams said.

The Illinois Department of Transportation approved the red light camera and determines if traffic lights need to be improved. IDOT said the lights meet federal requirements, but the intersection and the traffic signals are scheduled to be "modernized" in the next few years.

Anytime you turn right you should make sure to come to a full stop; the I-Team reported in their original investigation that about 95 percent of tickets are usually for right-on-red turns.