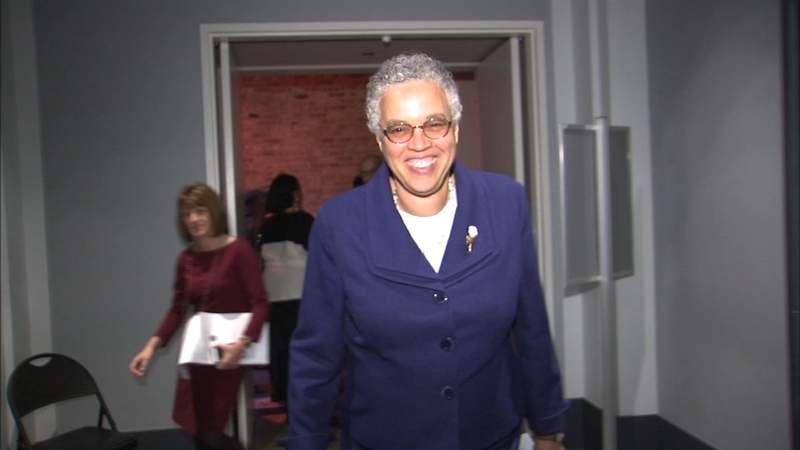 Will Toni Preckwinkle run for mayor

CHICAGO (WLS) -- Cook County Board President Toni Preckwinkle is closer to a decision about a possible bid for Chicago mayor. Preckwinkle's original plan was to announce the creation of an exploratory committee for a possible run for mayor. Instead her political director released a statement Monday saying Preckwinkle is giving serious consideration to running and she will make an announcement regarding her decision shortly.

Is she in or out? All political eyes are on Cook County Board President Toni Preckwinkle as she mulls over a run for mayor. Since Mayor Rahm Emanuel announced last week he is out, several names have been tossed around as possible candidates. But, some are sitting back and waiting for Preckwinkle to make a move.

"I think once you have a name like Preckwinkle in there, it does make people think twice about can I make the effort to get where I need to be in the top two slots and beat her in the final run off," said 32nd Ward Ald. Scott Waguespack.

While Waguespack is not running, his colleague 22nd Ward Ald. Ricardo Munoz is thinking about it, but waiting, "I'm still 80 percent in, but I'm waiting to see what the field looks like, I know what type of work it is," said Munoz.

Besides waiting on Preckwinkle, Munoz is waiting to see if his political allies Chuy Garcia or Congressman Luis Gutierrez decide to jump in.

City Treasurer Kurt Summers, who was Preckwinkle's chief of staff, is testing the waters as well. Today, Summers launched a website at www.ourchicago.net. "The future of this city should be determined by the many, not the few," Summers said in a video statement about the site. He asks visitors about qualities they want to see in next mayor.

For many in City Council, Preckwinkle has the qualities they are looking for to be mayor. "It does bring someone with a track record on the county side and a long record on the city hall side," said 6th Ward Ald. Roderick Sawyer. "Unlike Rahm Emanuel, I think there would be more inclusion at the table from Toni Preckwinkle," said Waguespack.