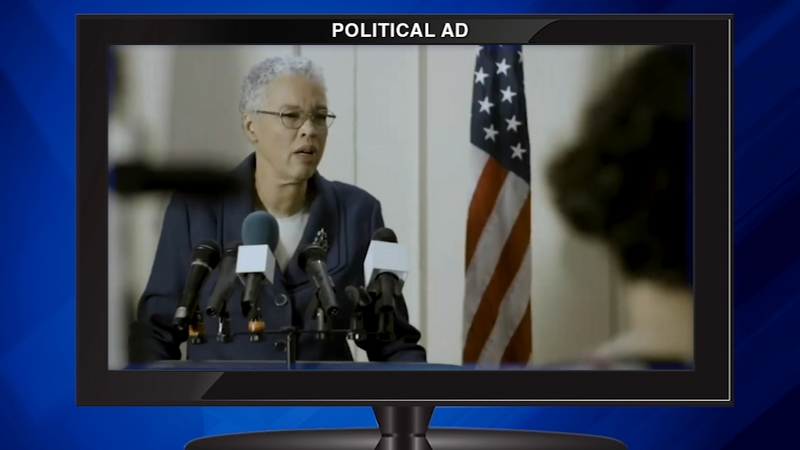 McDonald's great uncle, Pastor Marvin Hunter, said Friday that Preckwinkle spoke to him right before she was ready to release the television ad.

Hunter said that while the family is against taking advantage of Laquan's murder for political gain, they did not have an issue with the Preckwinkle ad after viewing it.

"I'm not here today to denounce or endorse. I'm here today to say that I and my family do not have a problem with the commercial being run," he said. "In fact, we're thankful for it, because it helps us to get to the end that we are looking to get to: That is a meaningful sentencing in the Jason Van Dyke sentencing."
WATCH: Preckwinkle under fire for Laquan McDonald political ad
EMBED More News Videos

Chicago mayoral candidate Toni Preckwinkle came under fire from some Thursday about a political ad she released highlighting her role in exposing the Laquan McDonald shooting.

She said she played a key role in releasing the autopsy report, which set in motion the outcry for the release of the dashcam video that showed former Chicago Police Officer Jason Van Dyke shooting the teen 16 times in 2014.
The journalist who first broke the story said the facts in the ad are true, but activists and several of several of Preckwinkle's opponents accuse her of exaggerating her role and taking too much credit.

Father Michael Pfleger doesn't dispute the facts of the commercial but questions the timing of its release as the city continues dealing with the wounds of the case.

"Why would you take a chance and put something out there that I think most people would say cause negative reaction?" he said.

While it may have been a risky move, ABC7 political analyst Laura Washington said Preckwinkle may have wanted something strong and dramatic to send a message to the African-American community.

"In this race, whoever gets into the runoff is going to have to have significant African-American support. She is fighting for support with several other candidates," Washington said.

Preckwinkle will likely face questions about the ad from her opponents at a candidates' forum that she's expected to attend on Saturday.