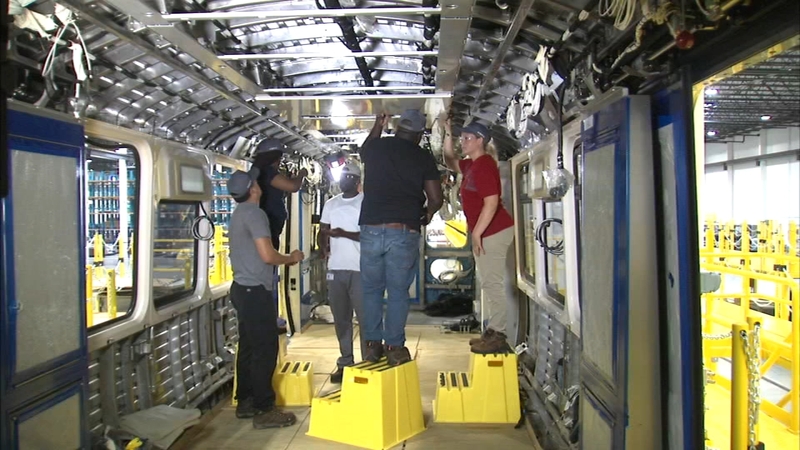 CHICAGO (WLS) -- As businesses across the country keep close eye on President Donald Trump's trade war with China, workers at a company on Chicago's South Side fear their newly found manufacturing jobs could go away.

The CRRC Sifang America company in Hegewisch is the first passenger rail car manufacturing in the U.S. since Pullman decades ago.

"When the trains come here they are literally nothing, and then when you build it, it's like, I did that, and I think that's pretty cool," said Liliana Maciel, CRRC employee.

Once CRRC delivers more than 800 cars to CTA, the future of manufacturing at 135th and Torrence is unclear.

"Nobody wants to see the work go overseas, or made somewhere else and assembled here," said Perry Nobles, CRRC employee. "We want to see the work here, made by American hands, done by Chicagoans for the Chicago trains."

"CTA was sort of the first foothold in the area, but CRRC is invested in making state of the art rail cars," said Marina Popovic, CRRC Sifang America.

CRRC is a Chinese-owned company. Some of their experts are in Chicago to train the city's workforce. And in the current climate, with the current tweets, discussions and legislation could prohibit Chinese-owned companies from having contracts with American companies that get federal funding, which would virtually eliminate the possibility of CRRC getting more contracts and doing more hiring.

"Every day is interesting, what's going to be in the news today, is it a tweet, is it an article," Popovic said. "That definitely has an impact, and everything that would be happening here is not in a vacuum. It's part of a bigger picture."

So far, 86 people have been hired by CRRC and about one-third are Chicago residents. Some employees came from shuttered auto manufacturing plants. Robert Rios said he went through four layoffs in the auto industry and was pleasantly surprised to see new manufacturing jobs.

"I just want to get all these first rail cars done, and show the world we are great at what we do," he said.