WLS
CHICAGO (WLS) -- Chicago police reopened the 35th Street ramp from the Dan Ryan Expressway after a muriatic acid leak from a truck closed the area for several hours. The CTA and Metra have resumed service near 35th Street after temporary closures.

The incident occurred around 12:30 p.m. Wednesday, just half an hour before first pitch at the White Sox v. Texas Rangers game at U.S. Cellular Field.

A 3600-gallon truck traveling southbound on the Dan Ryan started leaking the acid, so the driver pulled off the roadway and called for help. As the Chicago Fire Department's HAZMAT unit cleans up the spill, Illinois State Police are blocking the 35th Street exit. The acid is a strong corrosive used in cleaning bricks and concrete and has done some damage to the asphalt, officials said. HAZMAT investigators believe that spill was as a result of loose bolts on one of the valves.

Crews have slowed the leak while diluting the acid with water, and will put excess into an additional truck, moving fumes away from nearby buildings, officials said.

No one has been reported ill from U.S. Cellular Field and attendees leaving the game were detoured to avoid the area. As of 5 p.m., officials expected the scene to be cleared within the hour.

James Pettigrew rode his motorcycle by the area when they first discovered it.

"It smelled like when you put a little bleach and ammonia together to try to clean something, kind of strong, pungent, but they acted really fast," he said.

CTA Red Line trains temporarily bypassed the station at Sox-35th Street, but the station re-opened for service around 2:25 p.m., officials said. However, customers must access the station from 33rd Street, as its main entrance is still closed. Metra also resumed service at its 35th Street "Lou Jones" Bronzeville stop, although customers must enter that station via its east platform.

The detours posed difficulties for fans traveling to and from the game.

"We got detoured on the train, and they told us to get off here, and now we have to walk around," said Jack Potter, a Sox fan.

"Taking the Red Line down, had to switch to the Green Line, which took forever and is moving slow, and then we come here and they tell you that you can't cross over, you have to walk down to 33rd Street," said Barbara See, a Sox fan.

A driver pulled over when his truck began leaking acid on the Dan Ryan Expressway on August 6, 2014.

Some motorists driving behind the leaking truck pulled over after falling ill. Some called for medical assistance. 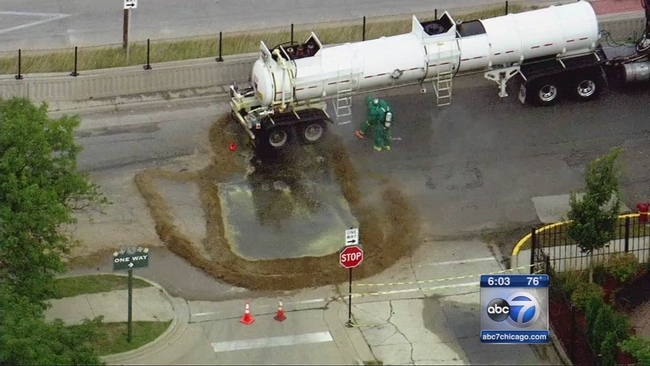