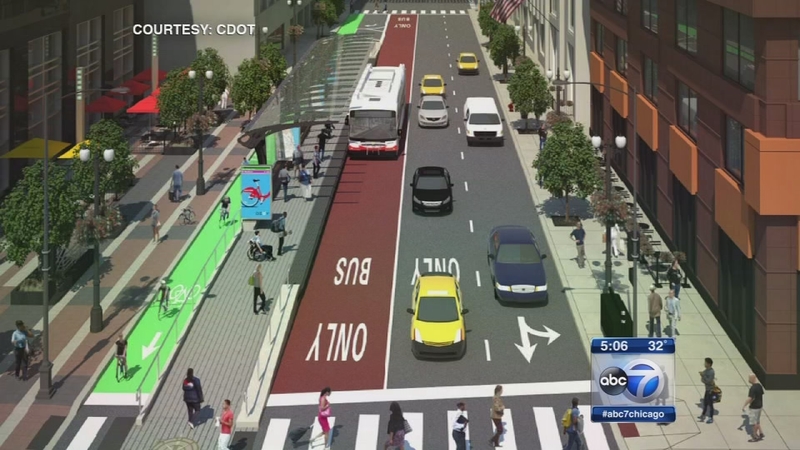 CHICAGO (WLS) -- Loop commuters should plan ahead delays as construction on a city project to improve bus service to and from downtown Chicago begins.

"About half of the people in vehicles along these streets downtown are actually in buses. But right now, buses are moving so slow that sometimes it's just faster to walk across the Loop," said Rebekah Scheinfeld, Chicago Department of Transportation Commissioner.

Two miles of bus-only lanes, marked by red pavement, will be installed on Canal, Clinton, Madison and Washington streets. The express lanes are expected to eliminate bottlenecks and make trips through the Loop faster.

CDOT released renderings of what the new lanes are expected to look like. 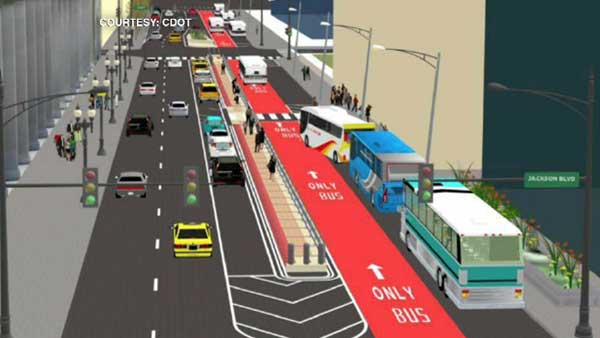 The completed project will have a big impact on drivers in and around the Loop. Protected bike lanes and wider sidewalks are also planned, as well as two lanes for regular traffic, instead of two. But CTA Spokesman Brian Steele said one less lane will also mean no buses weaving in and out.

"Right now, under the current configuration, if you watch traffic along Madison or Washington you'll see buses often times have weave in and out," CTA Spokesman Brian Steele said.

Renderings also show covered bus stations, or 'link' stations, to be built on Madison and Washington streets. They will be equipped with bus tracking monitors, letting commuters know when the next bus will arrive. Buses stopped at an intersection an early green light to get ahead of traffic.

Still to be worked out is whether or not to require a prepaid fare before boarding to save time.

City officials said construction is scheduled to begin March 16, starting with westbound Madison Street at State Street and southbound Clinton Street at Randolph Street. Construction zones will extend one block at a time as the project progresses.

Traffic will be reduced to two lanes during business hours on weekdays. Additional lane closures overnight and on the weekends may happen periodically. The city said no detours are planned. Drivers should plan alternate routes and allow extra travel time.

"I think it's definitely going to be better in the long run. But in the short term, it's going to have a lot of people very upset with all this construction going on," said LeRoy Wilson, a Loop bus commuter.

Work on eastbound Washington Street at Canal Street and northbound Canal Street at Van Buren Street is scheduled to begin later in the spring. Work to repair and update the infrastructure along the routes is currently underway.

The nearly $33 million project is scheduled to be finished by early 2016. Most of the project is funded by federal money.

Wabash Avenue will soon be closed between Washington and Madison streets for construction of a new elevated station. Later this year, Union Station will also get an upgrade.