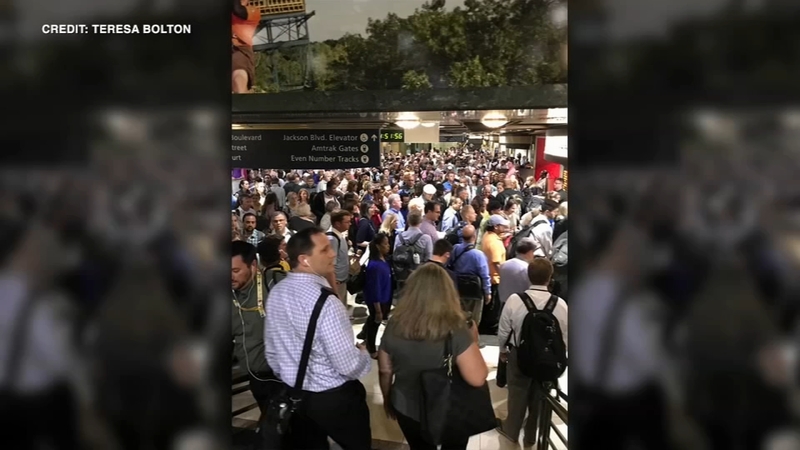 CHICAGO (WLS) -- Metra is apologizing to riders of its busiest line after a schedule change led to some trains being crowded and behind schedule.

Metra is also promising to add more cars to some trains on the BNSF line in the morning in an effort to cut down on the crowds.

Commuters trying to get on the BNSF line Tuesday afternoon were livid, sharing claustrophobia-inducing photos on social media. Platforms were packed.

"Especially right now, in the afternoon, it's nuts. And they just changed the times as well, it's absolutely crazy," said Stephanie Parry, Metra rider.

For the last two days the morning commute has also been brutal. Commuters in lock step like herded cattle, on one simple quest to get a seat.

"There only seems to be standing room so everyone is, like, squeezing in. For sure, you're not going to be able to find your own seat on the train<' said Grant Dean, Metra rider.

Metra handed out fliers Tuesday evening to frustrated commuters, apologizing and asking for patience as the agency figures out how to get it right.

Metra said the reason for the recent delays and overcrowding are federal guidelines for Positive Train Control, or PTC, technology that is built to prevent crashes and speeding trains. It also makes the turnaround time for trains longer.

"If you're getting in a little later, like 9 or 10, it's not terrible. If you're getting here in the prime rush hour between 7 or 8 in the morning, it's pretty bad," said Scarlett Harris, Metra rider.
Report a correction or typo
Related topics:
trafficchicagonear west sidemetracommutingtrains
Copyright © 2021 WLS-TV. All Rights Reserved.
More Videos
From CNN Newsource affiliates
TOP STORIES

Emergency program to give $50 off internet bill opens today