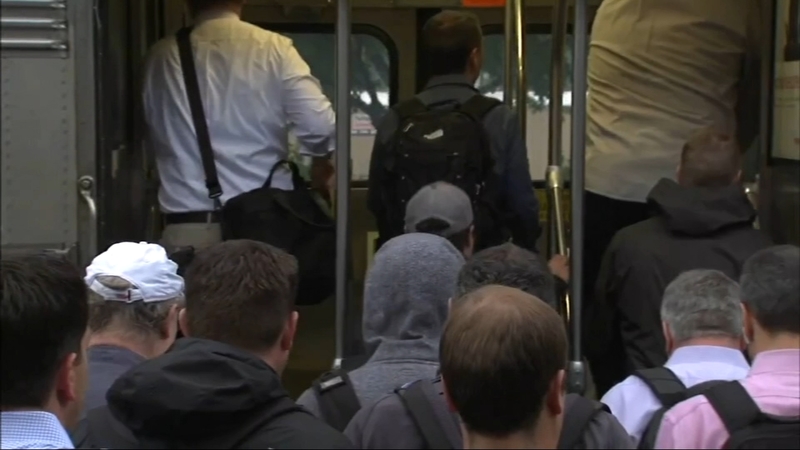 CHICAGO (WLS) -- As the evening rush hour got under way Wednesday, Metra rail users on the BNSF line hoped to avoid the severe overcrowding that has plagued several trains this week as the result of schedule changes implemented Monday.

"I got on the train first, so I got a seat, but five minutes after I get on, it's like standing. I don't think the conductors can collect tickets," said Stephen Stallionetti who commutes into Chicago from Clarendon Hills.

Donna Gizell, who also commutes from Clarendon Hills, said, "It's been very overcrowded and I think it becomes a security problem. What if somebody gets sick on the train? I think they need to add more cars."

The schedule changes came as a result of a new federally-mandated braking system installed on the trains which require a slightly longer turnaround. Most affected are six trains that operate during the rush hours. Metra has already taken action to alleviate the issue by adding cars to four of them. But Metra CEO Jim Derwinski says it's a fine line.

At its monthly board meeting Thursday, Derwinski apologized to users but also said the hiccups were not unexpected. This is the first time Metra has implemented such a large-scale schedule change at once.

"If we change the train time and we've changed train times many times before for different operational needs over the years, we really can't predict if people are going to take the earlier train or the later train. This is the first time it's being done on 94 trains at the same time," Derwinski said.

Metra says they plan to wait a couple of days before deciding whether to add more cars to the affected trains, since these can also change on a day-to-day basis. The rail agency will regroup Friday, at which time those decisions will be made, but Derwinski warns users it might take up to two weeks before all the kinks are worked out.

Metra service on the BNSF line was hit or miss Wednesday morning. Some riders said they had no problem, but others said things were still a mess.

Metra service on the BNSF line was hit or miss Wednesday morning. Some riders said they had no problem, but others said things were still a mess.

As thousands of morning commuters got off BNSF trains in the Loop, some felt the overcrowding problem wasn't getting any better.

"The trains are just becoming worse and worse. Like today, the doors couldn't shut, the conductor couldn't come through to get the tickets. I think it makes it more dangerous," Deanna Sansone said.

Metra officials said the agency added more cars to some trains Wednesday morning after the messy rollout of new schedules.

Riders took photos of packed platforms during the Tuesday evening commute and posted them on social media.

"There were no seats. Everyone was cramped like sardines," Brian Hosty said. "It's hot and some of the AC is not working on the trains. Metra has not done a good job rolling this out."

Riders coming and going from the western suburbs have been gritting their teeth for two days since Metra altered the BNSF train schedules to meet federal guidelines for a new automatic-breaking system.

The new technology makes the turnaround time longer. Some riders said Metra has not been able to keep the revamped schedules on track.

"I mean, bottom line is there is one train that showed up and they're like, 'Wait, you can wait for the next one five minutes behind it.' So the schedules are just all messed up. They can't keep up," said Larry Blaszynski, another Metra commuter.

Metra officials passed out fliers, apologizing for the problems and saying they were trying to adjust.

But not all Metra riders were frustrated.

"It seems like they're working out a lot of the kinks. Today it was just fine, actually. Because some of the people are not used to the schedule though, the earlier train is still a little bit lighter. So it's actually been quite enjoyable the last couple days," Scott Mygind said.

"My view is, a significant change like this - it's tough for everyone, including, I think, Metra. But it's a really good and important service to get us from the Loop, downtown and back home. So, hopefully they'll make the train adjustments. I hope they have enough cars. I don't think that many people are riding. Once those schedules change, I think people will be good," John Janicik said.