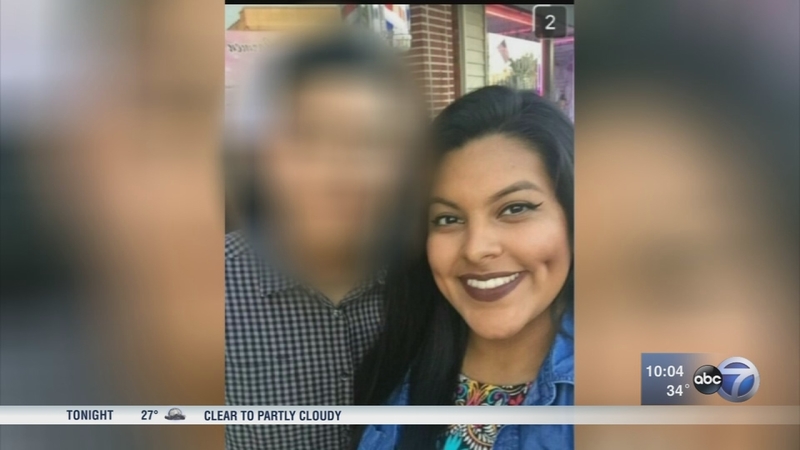 MELROSE PARK, Ill. (WLS) -- A car was struck by a freight train and pushed several blocks after the man behind the wheel drove around the railroad crossing gates in west suburban Melrose Park, investigators said. His female passenger was killed in the crash and identified Friday morning.

Jocelynn Morales, 21, of the 300-block of 22nd Avenue in Bellwood, was pronounced dead at the scene at 2:51 a.m., the Cook County Medical Examiner's Office said.

"You never think this is going to happen to you, that your kid is going to be involved in something like an accident," said Veronica Morales, Jocelynn's mother.

Up on the wall of the Morales' home is a photo of Jocelynn that captures her signature dimple smile, posing on the train tracks that would ultimately be the last place she was alive.

Veronica said her daughter had her whole life ahead of her. Jocelynn was a third year student at Concordia University on a full ride scholarship through Fifth Third Bank's Tomorrow's Promise program. She was studying to be a psychologist.

Fifth Third Bank issued a statement Friday, saying, "Fifth Third Bank is heart broken to hear of the news. Jocelynn was a bright, loving, incredible young woman. We were so proud to underwrite her college tuition because we knew she was someone who would make a difference in the world."

"She was always reading or studying for a test, or writing a paper," her mother said.

A 21-year-old woman who was a passenger in a car was killed when the vehicle was struck by a freight train after the driver went around the gates in Melrose Park.

Her family said she was out with friends Thursday night and was on her way home when the car she was in collided with a freight train.

The impact occurred just before 2 a.m. on the border of Melrose Park and Maywood, at the crossing located at Main Street and North 19th Avenue. The Union Pacific freight train pushed the vehicle along the tracks to the area near North 15th and Railroad avenues.

It took more than 40 minutes to extricate Jocelynn from the car. An autopsy has not yet been scheduled.

Only two things were left at the scene late Friday morning: the tattered bumper of a gold Acura and a shredded warning gate.

The driver, identified as 20-year-old Ivan Tabares-Gomez, was pulled from the vehicle by a police officer who arrived first at the scene, Maywood Fire Chief Craig Bronaugh said. He was transported to Loyola University Medical Center in Maywood, where he is listed in critical condition. No other injuries were reported. Friends said Tabares-Gomez was Jocelynn's best friend.

Family and friends gathered for a vigil Friday night, where Veronica's crippling pain was apparent.

"She told me all the time, 'Mom I am responsible, I know what I'm doing.' I just don't know how this could happen to her," she said through tears.

"Earlier today, after we left the hospital, everyone was talking about how the sun came out. We were saying that's her, she's telling us to relax, it's going to be ok," said Jasmine Velasquez, cousin. "We're going to miss her a lot."

Bronaugh said he hopes this serves as a lesson to others thinking of driving around the crossing gates.

"Under no circumstances do we want anyone, for any reason, to go around the railroad gates. The outcome is usually bad. There are times when the car wins, but the odds are not good. Again, we strongly recommend not doing that," Bronaugh said.