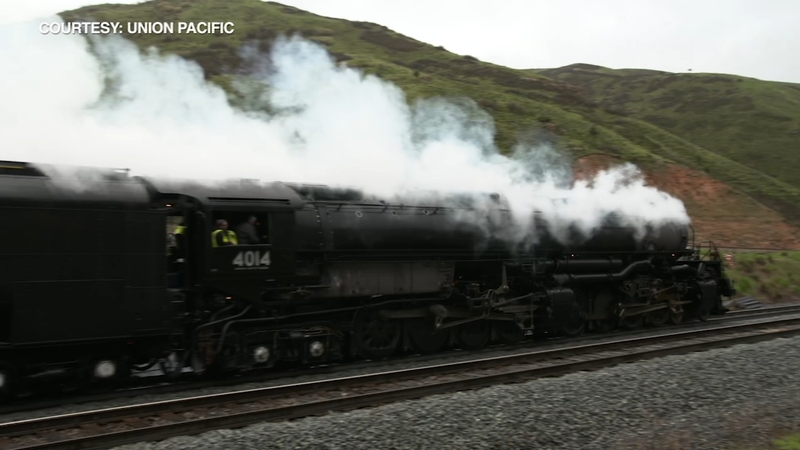 CHICAGO (WLS) -- The world's largest steam locomotive is coming through the Chicago area Friday. And if you're close enough, you'll feel it coming.

"It's almost the size of a Boeing airplane, and it is strong enough to pull 16 Statues of Liberty uphill," said Kristin South, director of communications for Union Pacific. "It's 1.2 million pounds and 133 feet long."

Called a Big Boy locomotive, it was one of 25 steam engine vehicles built by Union Pacific in the 1940s. Only eight still exist today, and many thought they'd never see a Big Boy in operation again.

"The last time a Big Boy locomotive operated was 60 years ago, back in 1959," South said in a phone interview. "And, as you can imagine, you don't go to a hardware store or a car parts store and pick up pieces for a locomotive of this size. So the team had to build this locomotive. In many of the cases, many parts are made from scratch again."

The Union Pacific is celebrating 150 years since the completion of the Transcontinental Railroad.

Out at 2Toots Train Whistle Grill, a locomotive themed restaurant in Glen Ellyn, they're ecstatic to be along the train's route.

"Nobody's closer than we are... The tracks are right out there," said Dale Eisenberg, co-owner of 2Toots. "The excitement's out there. We're actually going to name one of our burgers, the double bacon cheeseburger, the Big Boy."

After departing from Butler, Wis., at 8 a.m., the train will travel through Wadsworth, Northbrook, Des Plaines, Elmhurst, and Wheaton on its way to West Chicago.

The Big Boy will be parked at the Larry S. Provo Training Center for free events about the 150th anniversary of the completion of the First Transcontinental Railroad, which forever changed trade, transportation and communication in the United States.

"In the moment that the Golden Spike was tapped (marking the completion of the railroad), it united our nation in ways that it had never been united in the past," South said.