Electronics ban for some international flights now in effect

WLS
By Diane Pathieu, Michelle Gallardo and John Garcia
CHICAGO (WLS) -- Airports and passengers were grappling Sunday with the new ban on most electronics devices in cabins aboard some international flights to the U.S.

The ban on devices, excluding smartphones, impacts flights from 10 international airports from the Middle East and North Africa.

At O'Hare International Airport on Sunday, passengers who arrived from the United Arab Emirates via Etihad Airlines waited for more than an hour for their checked bags to go through secondary screening which is all part of additional screening measures.

"This was a surprise to me. I really don't see the reasoning behind it," said passenger Padhu Chakrabarthy.

Passengers traveling to the U.S. from 10 airports -- five of which fly to O'Hare -- were required to store their devices in the cargo hold.

Long lines at O'Hare early Sunday were due to secondary screening of luggage from some countries in the Middle East and North Africa.

Banned devices can stored in either luggage or at the gate. That includes laptops, cameras, gaming devices and tablets such as iPads and larger smartphones, like the iPhone 7 plus, are also not being allowed on board.

"Fortunately, I knew in advance so I knew to put it in my bag. But took a really long time here, that's what surprised me the most," said passenger Kent Nelson.

For business travelers accustomed to working on the plane called the ban a blessing and a curse.

"It probably was a good thing. I actually got to just relax instead of doing work," Nelson said.

Medical devices will still be allowed in the cabin after security screening.

The U.S. government officially notified the airlines on Tuesday and had a deadline to comply by Saturday.

Travelers heading to the U.S. from 10 international airports are feeling the impact of a new electronics ban. 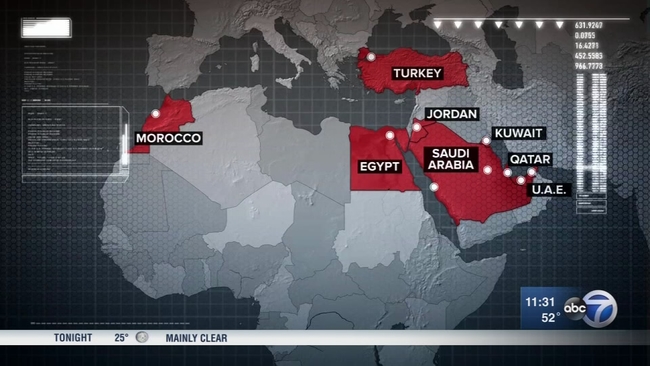 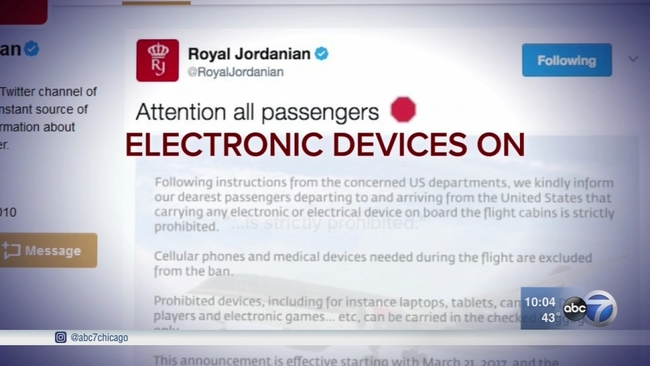