Passenger kicked off flight for poking snoring seatmate with pen

WLS
By Eric Horng
CHICAGO (WLS) -- A passenger was removed from a Southwest Airlines plane after what airline officials called a "disturbance" on board a jet at Midway Airport.

A Southwest spokesperson said a passenger on Flight 577 to Manchester, N.H., was removed from the flight for "poking her seatmate with a pen to stop him from snoring."

It was a rude awakening for air traveler Lenny Mordarski. The encounter left ink marks on the sleeve of his shirt.

"Imagine being asleep and then being stung by bees, and then waking up and going 'owww,'" Mordarski said.

Mordarski had been jabbed, he says, by the woman seated next to him while the plane was still on the ground at Midway around 1 p.m. Thursday.

"Chucklehead here fell asleep on the taxi on the runway, and I guess his arm kind of brushed over to her. She just went nuts and started stabbing him with the pen. He screamed really loud, almost like a little girl," said Michael Sutton, Mordarski's friend.

"Yeah, my arm hurt because I was being stabbed by a pen. And that's why I made a lot of noise and the attendants came," Mordarski said.

A Southwest Airlines spokesperson says the woman was trying to stop Mordarski's snoring. The plane returned to the gate and the woman was removed from the aircraft.

"She was smirking, and we just never... I mean, she said zero at this point, and I just kind of, and all I wanted to do was not be sitting next to her," Mordarski said.

The Chicago Fire Dept. was called to look at Mordarski's injuries - just some bruises - before he continued on the flight to New Hampshire, which was delayed by the incident.

"They gave us free gin and tonics. They were super nice. They were making jokes at the end of it, said 'Everyone keep your pens, keep your writing utensils to yourself,'" Sutton said.

Mordarski said he declined to press charges. Southwest said the woman was put on a later flight. 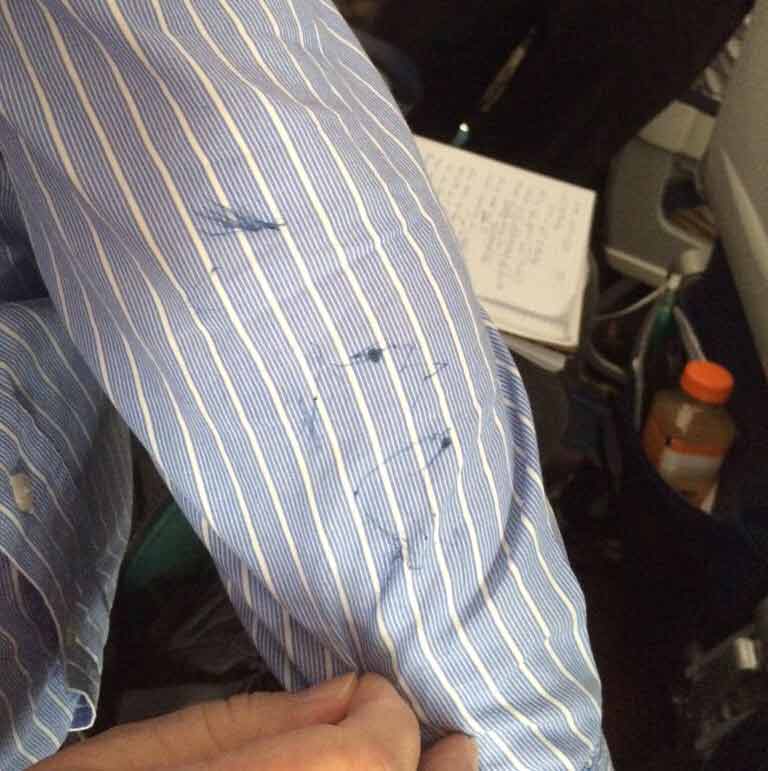 This photo appears to show the alleged victim's arm after the confrontation.