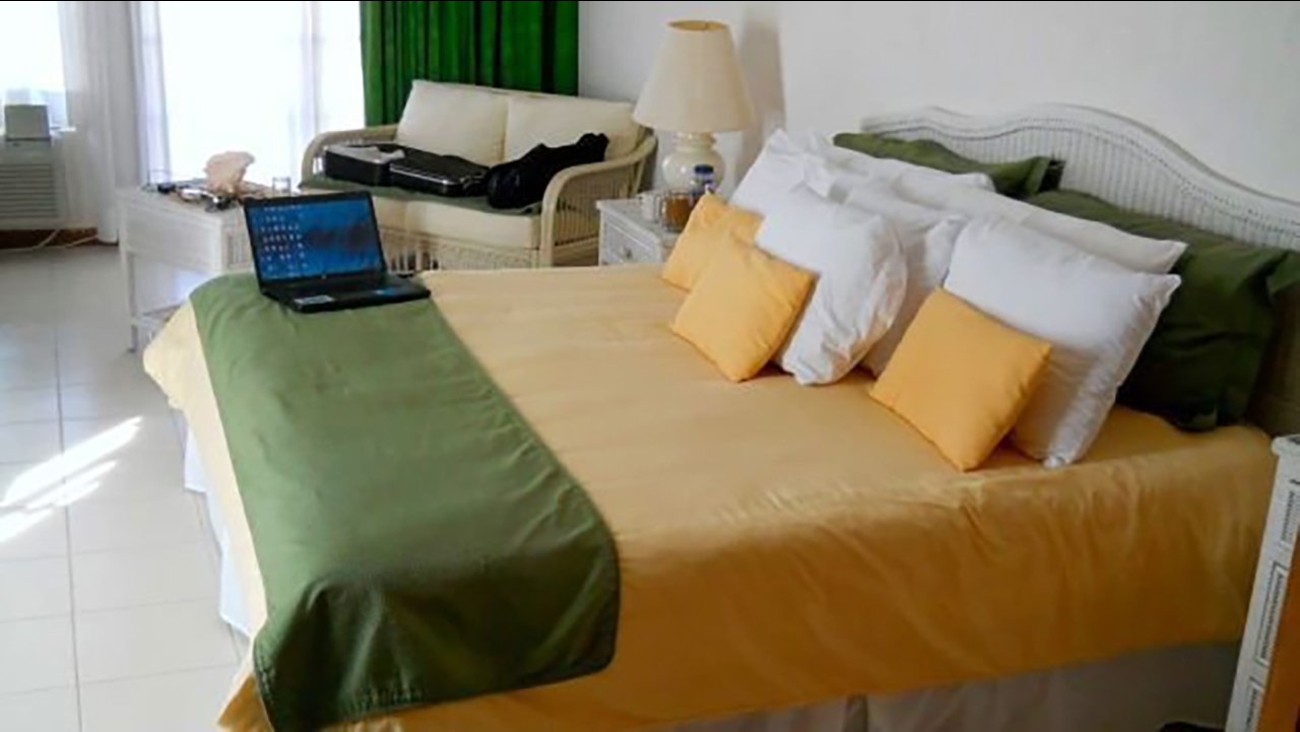 All beds at the The Resort are king-size and steel-reinforced, so guests don't have to worry about breaking them. (The Resort.)

Tucked away on the island of Eleuthera in the Bahamas, The Resort seems like a typical Caribbean hideaway.

But there's one crucial difference: This property has been specially designed to accommodate plus-size people.

All doorways have been widened, the chaise lounges are built to hold up to 250 kilograms and the beds are reinforced with steel bars.

The end result, according to it's founder James King, is a "safe haven" where overweight people can travel, relax and be free "to do things other people take for granted," such as putting on a swimsuit or going for a walk on the beach "without feeling judged."

King was inspired to set up The Resort 15 years ago, while working at a hotel in Grenada after witnessing a female hotel guest sit on a beach chair "and literally go through it."

The embarrassed woman was subsequently charged $150 for damaging hotel property.

He says he tried to persuade the owners to acquire furniture that was stronger and sturdier, but his suggestions fell on deaf ears.

However King soon discovered that there weren't any suitable fixtures on the market that met the needs of very overweight people anyway.

After putting in years of research, he and his wife decided to take the plunge and set up what they describe as "the world's only plus-size friendly resort" after settling on a property in the idyllic Bahamian island, which is 80 kilometers east of Nassau.

"I thought my biggest challenge would be finding a suitable property -- and although that was a challenge, it wasn't the main one," he says.

"Finding all the fixtures and fittings was the toughest part. Anything that could be adapted and put into a resort to accommodate plus-size people -- it just didn't exist.

"There were no beds available to accommodate those who are plus-size, other than hospital beds.

"Over time I found out that the vast majority of really overweight people have a mattress on the floor in their homes."

The Resort opened in 2015, and while business was slow at the start, it's now booked up through spring 2018 and was recently featured in a documentary on UK channel ITV.

A six-day stay starts at $16,400 including food, which is supplied three times a day through a buffet of a mixture of Caribbean cuisine and American comfort food.

The property, which has 24 rooms and five miles of private beach, only offers group bookings (with a maximum of 28 people) to ensure guests feel completely at ease.

"We started with a more standard approach to bookings, but found that guests would start to relax and feel ready to put on a bikini for the first time, or take off their shirt off for the first time," King adds. "And then more people would check in.

"It tipped the balance of that comfort zone we were trying to create, so we switched to only doing small groups."

King says the response to The Resort has been overwhelming, with travelers describing their stays there as "life changing."

"The impact the property has on people is just staggering because all of a sudden they feel comfortable -- some of them for the first time in their lives," he explains.

"It just opens them up like you'd never believe. People who have never gone for walks on the beach because they're too embarrassed are walking a mile or two miles across the sand every day and doing cannon balls in our swimming pool.

"They're mentally relaxed and comfortable and are able to be incredibly active."

One such guest is 53-year-old Shawn-Marie Riley, who visited The Resort in 2015 and plans to return as soon as she can.

The Texan says she was constantly worried about breaking chairs, fitting into bath tubs and being judged by other holidaymakers during previous vacations.

But she was able to relax and wear a bikini without feeling uneasy during her time at the property, something she describes as "beyond a gift."

"The Resort recognizes that people of size have insecurities and challenges that the general public never consider," she says.

"We are encouraged to be active and explore the beach and surrounding areas and feel free to experience all that it has to offer."

While The Resort has been accused of "normalizing" obesity, Riley says this is far from the case.

"The meals are delicious with beautiful fruits and local seafood, encouraging healthy eating," she adds.

"Just because someone accommodates a plus-size person, does not mean they are encouraging you to remain plus-size."

In fact, although the property caters to overweight people, anyone over the age of 18 is welcome to stay there, provided they are in reasonably good physical condition.

"I started this because these people were discriminated against, so the last thing I'm going to do is start discriminating myself," says King.

He explains that, although The Resort adheres to a rough maximum weight requirement of around 180 kilograms due to the 40 foot elevation from the property to the beach, he's accepted guests who weighed over 220 kilograms as they were "incredibly fit" and had no problem going up and down the stairs.

"I judge it more on their physical condition now," he adds. "We can't have people who use mobility scooters for example, as they wouldn't be able to get down to the beach and can't get the full benefit of the property."

BEAUTIFUL BEACHES
While The Resort's buffet meals system seems like a controversial choice, King says one of the main reasons behind this is to maintain the privacy of guests by limiting the need for servers.

"All food is cooked on the property. I believe one bad meal ruins a holiday and I just won't tolerate that," he adds.

"They (guests) can have as much or as little as they choose to have. No one is looking over their shoulder and saying, 'Hey. Weight Watchers says that's 547 points.'

"Some people make the assumption that because someone is plus-size we're going to put an extra heaping of mashed potato on their plate, but that's just not the case."

The island of Eleuthera, which takes its name from the Greek work meaning "free," is known for its beautiful beaches and calm waters.

While guests can book activities like windsurfing and diving if they choose, most never leave the property during their six-day stay.

"It's a place where they can come, unwind and recharge your batteries. The Resort is run on Caribbean time and I get guests to remove their watches as soon as they arrive.

"I tell people all the time, if you want a lot of activities take a cruise or go to Miami beach.

He plans to set up a second resort in nearby Cat Island next year and has already found a suitable property.

Meanwhile the Eleuthera site continues to thrive, with many upcoming bookings coming from returning guests.

"A tremendous amount of guests stay in touch with us after they leave," says King.

"It changes their lives. They remain active, less inhibited and less worried about what other people might think of them."

Despite the success of his business venture, King stresses that The Resort wouldn't need to exist if standard hotels catered for plus-size people.

"With such a high percentage of travelers being 'of size,' everyone would benefit by making some rooms plus-size friendly," he says.