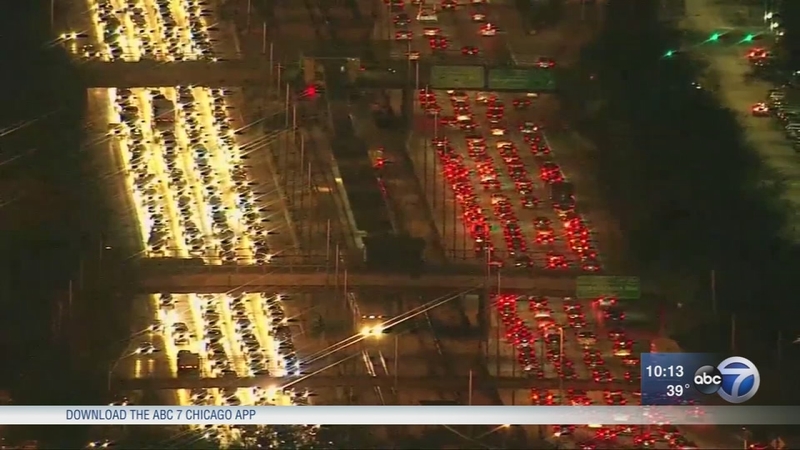 CHICAGO (WLS) -- The holiday rush was underway Thursday as a record number of travelers opted to drive to their vacation destinations, according to AAA. Thursday will see the most traffic of any day this week, with congestion peaking between 4 p.m. and 6 p.m.

"I would recommend leaving earlier or waiting until Saturday to actually hit the road. Aside from that, traffic isn't really too bad this time of year, believe it or not," said Julie Mossler, a spokesperson for Waze.

In Illinois, over 5.1 million people will be driving during the next few days, up 2.3 percent from 2016.

And true to predictions, there was gridlock on Chicago's highways as people left for the holiday.

"It's really kind of packed out there. There's a lot of cars, a lot of trucks," said Heidi Kangas.

Heidi and Chris Kangas were headed to Georgia from Wisconsin and decided to drive through Chicago during rush hour. Chris had dressed for the ride.

"I'm dressing the way I'mg oignt o end up at the hotel room halfway there, ready to go to bed," he said.

According to Waze, Christmas Day will have the least amount of traffic of any day until Jan. 4.

The DiMaggio family from St. Jo, Michigan, hit the road on Thursday, the peak day for holiday road congestion. They were on their way to O'Hare International Airport for a flight to Disney World.

Melissa Almodovar said she planned ahead and got on the road Wednesday night to go from North Carolina to Wisconsin.

"This is crazy because the kids are out of school now, everybody is going to be getting on the roads today, whereas I have two hours left in my drive," said Almodovar.

Gas prices across Illinois are about $2.51 per gallon on average, compared to $2.28 per gallon last year, but most travelers will find cheaper prices out of state.

Madeleine Willis said she is traveling with her family and their dog, Buck, from Michigan to Minnesota, their van packed full of presents, champagne, cookies and luggage. Their mission was to avoid the traffic crunch.

"Wanted to miss the Chicago rush hour, there hasn't been too much traffic so far, we're trying to miss the snow in Wisconsin because there's supposed to be a storm coming through," said Willis.

O'Hare and Midway International airports said travelers should allow extra time to get through security during the next few days. Friday is expected to be the busiest day for air travel.

Many tried to beat the rush Thursday night.

"I decided just to play it easy, leave a little extra time, a couple extra days in case I got bumped, in case there was weather," Carolyn Billetzeaux said.

And Mark Swierzy had a bag full of presents, wisely unwrapped.

"When you go through security, you never know, and you don't want to unwrap them there," he explained.