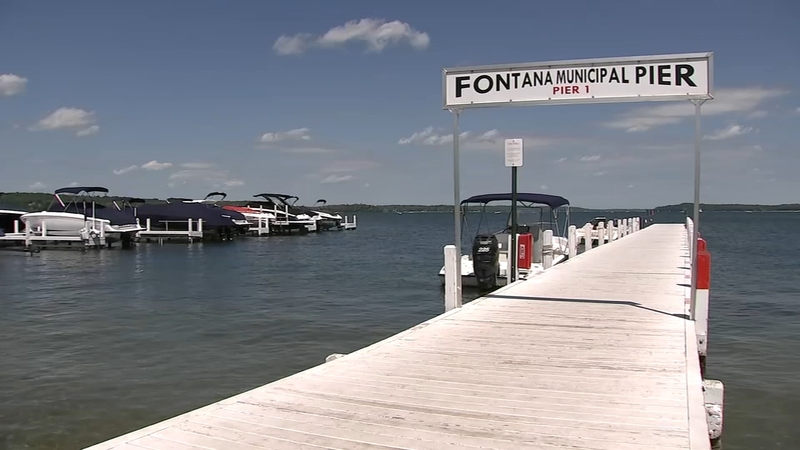 Tuesday morning, the city announced that Wisconsin as well as Missouri, North Dakota, and Nebraska would be added to the list, which now includes 22 states.

"We're also seeing an increase in states around us, Wisconsin, for example, is going to go on our quarantine list later this week," Lightfoot said.

City-wide self-quarantine orders will now be directed to incoming Wisconsinites and Chicagoans returning after more than 24 hours across the border, as case counts quickly rise in the state that full re-opened weeks before Chicago.

"I think Chicago, we are doing well, because we were extremely prudent. When we started to reopen up, we didn't go as large with capacity, for example, as other areas across the country," Lightfoot said.

Commuters would not have to quarantine, but are being encouraged to avoid any activities in Chicago unrelated to work.

Those passing through Wisconsin, stopping for less than 24 hours would not have to quarantine, but day trips for shopping would not be allowed, even if it's just for a few hours.

The heavily traversed border between Illinois and Wisconsin could make summer recreation and family travel difficult.

Wisconsin will be added to Chicago's travel quarantine order Tuesday when the list is updated, Mayor Lori Lightfoot said at a media appearance Monday afternoon.

"If Chicago thinks our people should stay home, then we better put some damn masks on and make sure that we continue to reverse the course that we're in," said Wisconsin Governor Tony Evers.

Fontana, on the southwest part of Lake Geneva, thrives on visitors from Illinois in the summer. The population there swells nearly 10 times the size of the off-season, and the majority of the tourists are from the Chicago area.

"We get about 90 days to make our income, so it's already stressful, and this will be tough on our people," said F.J. Frazier, a Fontana resident who works at a tour boat company.

Chicago quarantine: Kansas added to city's travel order for states with surging COVID-19 rates, Wisconsin could be next

"The state of Wisconsin has not even put a mask requirement in place. And there's not a sign that says they are turning their outbreak around. And there is significant risk, at this point, and more importantly, there's significant risk to Chicago, when folks do return," said Chicago Department of Public Health Commissioner Dr. Allison Arwady.

The order applies to people from Wisconsin coming to Chicago for non-work purposes and Chicago residents returning from Wisconsin. Essential travel and travel for work is exempted, but they could be asked to limited their activities to only being work-related and asked to avoid public spaces

"We have specifically, particularly for Wisconsin which we know is going to be of major impact to a lot of folks in Chicago, we've been careful to lay out the fact that people who are commuting for work to or from Wisconsin are able to continue that commuting for work, but they need to limit their activities in Chicago," Dr. Arwady said.

Fontana's village president Patrick Kenny is being hit with a double whammy; his full-time job is based in the Chicago Loop and his town's tourist-related businesses will likely to take a serious hit as well.

"They're going to suffer because I think people are going to think twice about coming over the border," he said.

The mayor also said the city is closely watching the COVID-19 numbers in Indiana, which are approaching but have not yet met the threshold to impose a quarantine order.
The states currently subject to quarantine are:
-Alabama
-Arkansas
-Arizona
-California
-Florida
-Georgia
-Idaho
-Iowa
-Kansas
-Louisiana
-Mississippi
-Missouri
-Nebraska
-North Carolina
-North Dakota

HOW WILL CHICAGO ENFORCE WISCONSIN QUARANTINE ORDER? THROUGH SOCIAL MEDIA, FOR ONE
EMBED More News Videos

If you've ever wondered whether the city of Chicago saw those social media posts from a state subejct to a COVID-19 quarantine order: they have.

While the main goal of the restriction is to educated people into compliance, there could be fines, so scofflaws may want to limit posting vacation pictures on social media.

Chicagoans who keep their boats in Kenosha may need to rethink their weekend getaway plans as well as any summer vacations that might take them north of the "Cheddar Curtain," or to any other neighboring states now on Chicago's travel quarantine list.

"I know how hard this is, I know that we're heading into August and I know that Wisconsin is one of the main places that that Chicagoans go on vacation. People who have summer homes or people who have vacation plans are not exempt from this quarantine requirement," said Arwady.

"Obviously when we're trying to contain this virus. You know, and there's other states that are having issues and their numbers are spiking, like, to me it makes sense that we do have these travel orders," said Chicagoan Melissa Benge, who was shopping across the border Tuesday.

Many Chicagoans keep their boats at the Southport Harbor in Kenosha. Some owners wondered just how the city will enforce the order, and how many people will actually self-quarantine.

"If somebody came up here and then goes back to Chicago, I doubt whether they're going to go to the police station, the first thing and check in," said Don Brayer, Northbrook.

Dr. Arwady says they are already doing enforcement for states currently impacted by the city's travel order, and vacation pictures could come back to haunt people.

"There are some social media examples where people are flagrantly posting their, their social activities. Clearly out and about in Chicago after being in settings that are subject to our quarantine order within the timeframe and so there's a number of ways that we're looking at this," Arwady said.