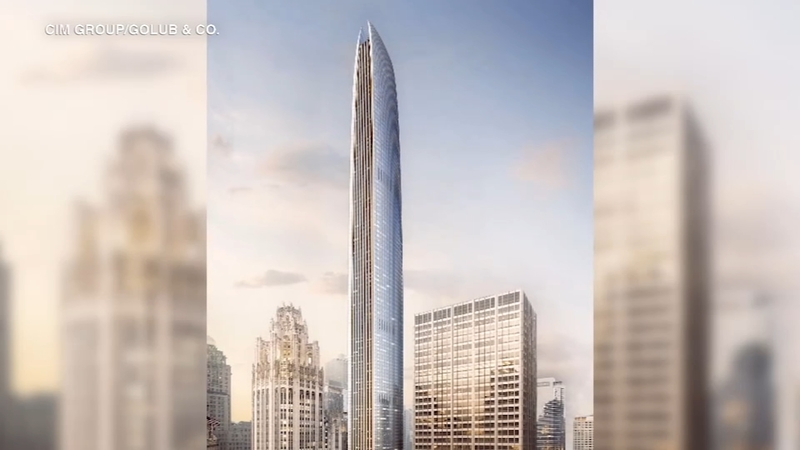 CHICAGO (WLS) -- Tribune Tower Development unveiled a proposal to build a new skyscraper on the Magnificent Mile that would reshape Chicago's skyline.

PHOTOS: New skyscraper to be built next to Tribune Tower

If approved, the yet-to-be named skyscraper would sit just 29 feet under the Willis Tower, making it the second tallest building in the city.

Developers released renderings of the proposed building at a community meeting Monday night.

The new 1,422-ft. mixed-used tower would sit next to the historic Chicago Tribune Tower on Michigan Avenue. It would surpass Trump Tower, which stands at 1,389 ft.

Dominique Abrams currently works in the Tribune Tower and welcomes the new project.

"I think it's cool. I mean, I think it's going to be a popular place for people to live and I don't really mind moving buildings. The building is kind of old inside," Abrams said.

The historic Tribune Tower is also part of the development and will get a facelift of its own, while preserving its landmark status.

"It's a historic building. It's Chicago Tribune. So I think it's important that they keep it," Abrams said.

If approved, the development will feature new retail space, a new 200-room hotel, and 700 residences, including condos and apartments.

To move forward, the developers, Chicago-based Golub and Co. and Los Angeles-based CIM Group, will need zoning approvals, financing for the project and to win over residents who would have to endure the massive construction project.

"I'm fine with that. I think its great thing to have something else new here for people to come and check out," said Donna Thompson-Brent, a Chicagoan.

Among the list of community benefits presented at the meeting: the project is expected to create thousands of construction jobs and hundreds of new permanent jobs in the city.

The Chicago Tribune will move from Tribune Tower in June. CIM Group and Golub purchased the building in 2016 for $240 million.

The first phase of the more than $1 billion project calls for 163 condominiums at Tribune Tower, to be occupied in 2020. Construction on the new tower is tentatively scheduled to start in 2019.

The owners of Chicago's Tribune Tower have unveiled plans to build a skyscraper next to the neo-Gothic building that would be the city's second tallest.