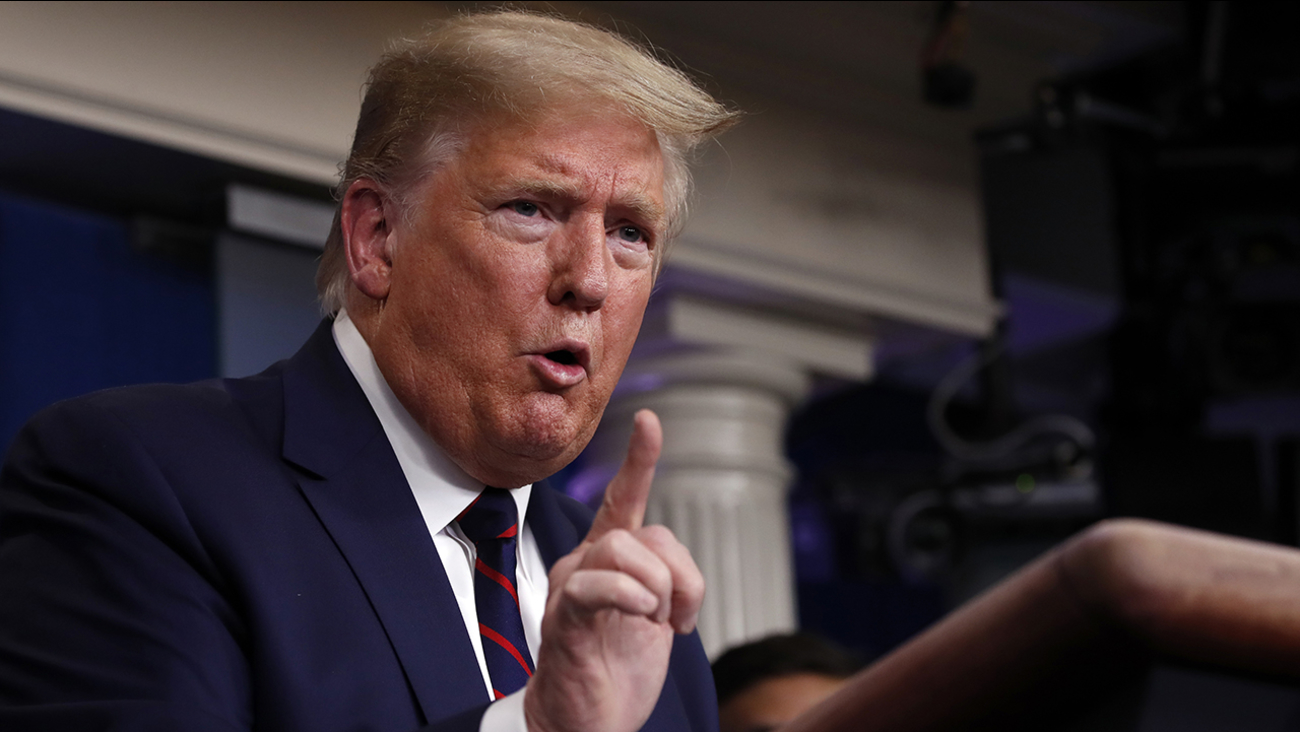 WASHINGTON -- After days of desperate pleas from the nation's governors, President Donald Trump took a round of steps to expand the federal government's role in helping produce critically needed supplies to fight the coronavirus pandemic even as he warned the leaders of hard-hit states not to cross him.

"I want them to be appreciative," Trump said Friday after the White House announced that he would be using the powers granted to him under the Korean War-era Defense Production Act to try to compel auto giant General Motors to produce ventilators.

Yet Trump - who hours earlier had suggested the need for the devices was being overblown - rejected any criticism of the federal government's response to a ballooning public health crisis that a month ago he predicted would be over by now.

"We have done a hell of a job," Trump said, as he sent an ominous message to state and local leaders who have been urging the federal government to do more to help them save lives.

Trump said he had instructed Vice President Mike Pence not to call the governors of Washington or Michigan - two coronavirus hotspots - because of their public criticism. "If they don't treat you right, I don't call," Trump said.

The comments came after Trump unveiled a slew of executive actions to bolster states' capacities to respond to the pandemic, including authorizing Defense Secretary Mark Esper to call up an unspecified number of federal reservists to help with the coronavirus response.

Friday's invocation "should demonstrate clearly to all that we will not hesitate to use the full authority of the federal government to combat this crisis," Trump said.

Trump had been saying for more than a week that he was reluctant to use the Defense Production Act - even after he invoked it - because companies were already doing what he wanted and he didn't need arm-twisting to make them comply.

Yet Trump continued to suggest that states' own failures were to blame for the needed intervention. "Normally these would be bought for states, just so you understand," he said.

The president has been under growing pressure from the nation's governors to do more to bolster supplies, despite the perceived risks of speaking out. From New York to Washington, they have pleaded with him to use the DPA to force companies to manufacture critical equipment. And they have begged for help in obtaining supplies like masks and testing agents, saying that states have been forced to compete against one another as well as the federal government on the open market, driving up prices, even as federal officials have pledged their help if states fail.

The notoriously thin-skinned Trump has not taken well to their criticism. Instead, he has lashed out at governors, continued to diminish the risk posed by the virus and insisted that the federal government was only a "backup" as he looked to avoid political costs from a pandemic that has reshaped his presidency and tested his reelection plans.

In a Thursday night interview with Fox News' Sean Hannity, Trump declared that Washington Gov. Jay Inslee "should be doing more" and "shouldn't be relying on the federal government." He dismissed New York Gov. Andrew Cuomo's requests for additional ventilators to keep patients alive, saying, "I don't believe you need 40,000 or 30,000" of the devices, which force air into the lungs of those too sick to breathe. And he said he was still weighing Michigan Gov. Gretchen Whitmer's request for a disaster declaration, saying, "We've had a big problem with the young, a woman governor from, you know who I'm talking about, from Michigan."

"You know," he added from the White House, "we don't like to see the complaints."

The administration's mantra, frequently articulated by Mike Pence, has long been that the fight against the virus must be "locally executed, state managed, and federally supported."

But Trump has show little public empathy for the states' predicament, with his emphasis skewed toward the "locally executed" portion of that trifecta.

Whitmer, in particular, has criticized the administration's response to the pandemic -- including on national cable TV shows -- saying that the federal government should do more and that Michigan's allotment of medical supplies from the national stockpile is meager.

"It's very distressing," the Democratic governor told radio station WWJ. "I observed early on, like a lot of governors on both sides of the aisle, that the federal preparation was concerning. That apparently struck a nerve, and I've been uniquely singled out despite my voice not being the only one that observed that," she said.

"I don't go into personal attacks. I don't have time for that," she said. "I need partnership out of the federal government. We have to be all hands on deck here."

Cuomo has also been on the forefront, some days criticizing the administration's failure to act and at other times commending federal assistance. But the New York Democrat has remained clear that the state, which is now the epicenter of the crisis, needs many more ventilators than it has at the ready.

"That's what the data and the science said," Cuomo said Friday as he defended his ask for additional ventilators and issued a new request to Washington for an additional 41,000 beds in temporary hospitals.

"What is unclear to me is why the federal administration refuses to direct industries to manufacture critical PPE," Oregon Gov. Kate Brown, a Democrat, said Wednesday, referring to personal protective equipment. "I'm not exaggerating when I say this outrageous lack of action will result in lost lives. Including those of our health care workers."

"The governors have been very gracious, for the most part," Trump said Friday. But he complained that, "There are a couple that aren't appreciative" of the "incredible job" he claimed to be doing, adding: "They have to do a better job themselves, that's part of the problem."

Just a month ago, Trump was predicting the U.S. was days away from being "close to zero" coronavirus cases. Now, the country has more than 100,000 cases nationwide.

The Friday order Trump signed on General Motors instructs his administration to explore forcing the company to accept and prioritize federal contracts to produce ventilators. He also sent a letter to Congress on Friday that said he had authorized Esper to order units and individual members of the Selected Reserve, as well as certain Individual Ready Reserve members, to active duty. They are separate from, and in addition to, National Guard members who have been mobilized by state governors.

The reserve call-up likely is intended to fill gaps in medical expertise as the military deploys field hospitals to cities hard hit by COVID-19 and provides other forms of medical support to state and local authorities.