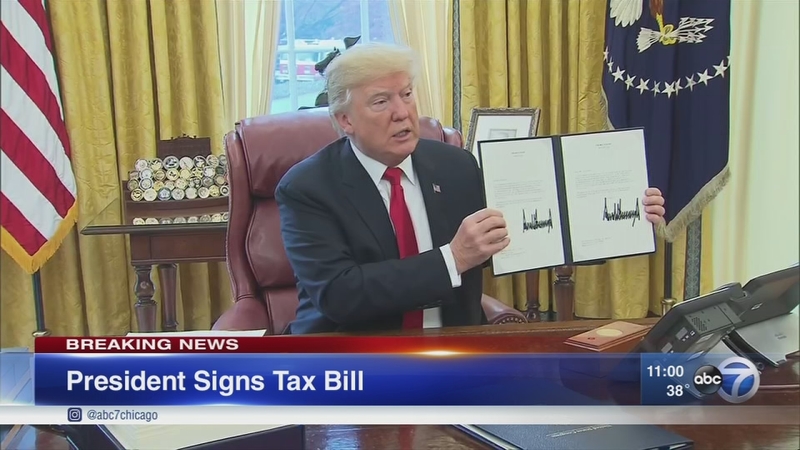 WASHINGTON -- President Donald Trump signed the $1.5 trillion tax overhaul into law Friday, using his last moments in the White House before flying to Florida for the holidays to celebrate a much-needed political win.

He also signed a temporary spending bill to keep the government running and provide money to upgrade the nation's missile defenses. The tax cut, which fulfilled a long-held Republican goal, was at the forefront of Trump's mind.

Starting next year, the new law will give big cuts to corporation and wealthy Americans and more modest reductions to other families. Trump continued to pitch it as a win a for the middle class, insisting that even though polling indicates the tax cut is unpopular, "the numbers will speak" for themselves.

"I don't think we are going to have to do much selling," Trump told reporters in the Oval Office.

The tax law is the largest since 1986, but far from the biggest in American history, as the president repeatedly claims. It also is projected to add to the nation's debt, something that was anathema to Republicans for years.

Passage of the tax bill marked a significant victory for a president hungry for one after chaos and legislative failures during his first year in office - including an effort to repeal former President Barack Obama's health care law - despite Republican control of Congress. Trump also ended the year with his sights still trained on the way the media treat him, tweeting that the mainstream media "NEVER talk about our accomplishments in the end of year reviews."

"We are compiling a long beautiful list," he tweeted.

Trump said that he originally planned to sign the tax bill early next year but moved it up on the spur of the moment after watching media coverage Friday morning about the legislation. After finishing the bill signings, he was off to Mar-a-Lago in Florida, his plane leaving Joint Base Andrews in Maryland just before noon EST.

The first major overhaul of the nation's tax laws since 1986 could add $1.5 trillion to the national debt over the next decade, according to the Congressional Budget Office. Republican leaders have said they're willing to take that step in pursuit of a boost to the economy. But some in the GOP worry their party could face a political backlash without an aggressive public relations tour.

Trump, meanwhile, continued to send mixed messages about his desire to work across the aisle. In the Oval Office, he contended anew that Democrats "don't like tax cuts, they want to raise your taxes."

But that came just hours after he tweeted a pitch for bipartisanship: "At some point, and for the good of the country, I predict we will start working with the Democrats in a bipartisan fashion. Infrastructure would be a perfect place to start. ... It is time to start rebuilding our country!"

Some White House aides and Republican leaders are looking warily ahead at the midterm election year, when typically a president's party loses seats in Congress. That's all the more true for presidents whose approval ratings dip below 50 percent, and Trump's have never been that high.

Additionally, the new tax law that they see as the GOP's top talking point is unpopular. Only about 1 in 3 voters have supported the legislation in recent days, according to several polls. About half of Americans believe the plan will hurt their personal finances. And 2 in 3 voters say the wealthy will get the most benefits, according to a USA Today/Suffolk University poll released last week.

But if the cuts for individuals are allowed to expire, most Americans - those making less than $75,000 - would see tax increases in 2027, according to congressional estimates.

Only high-income people would get a meaningful tax cut after 2025, when nearly all of the plan's individual income tax provisions are due to expire.

Republicans argue that the middle class will see benefits from the business tax cuts, in the form of more jobs and higher wages.

Democrats say that's not likely to happen, that the tax cuts are simply a boon to wealthy Americans like Trump and leave lower-income families in a lurch.

Exes and taxes: How the tax overhaul will alter alimony

Congress' giant tax overhaul is poised to reach virtually every corner of American life - even Splitsville.

Republicans delivered their sweeping plan to an exultant President Donald Trump, who signed it into law Friday. One provision scraps a 75-year-old tax deduction for alimony payments. The new rules won't affect anyone who divorces or signs a separation agreement before 2019.

Many divorce experts worry that the change will make negotiations tougher and lead to less spousal support as cash goes to taxes instead. Congressional tax writers say it's only fair to married couples.

A look at the details:

WHAT'S CHANGING? HOW DOES IT WORK NOW?

Currently, the spouse paying alimony can deduct it from their taxes and the spouse receiving it has to pay income taxes on it.

In any divorce commenced after Dec. 31, 2018, the spouse paying alimony can't deduct it, and the spouse receiving the money no longer has to pay taxes on it.

"This is something that was very helpful in settling divorce cases," says Jef Henninger, a New Jersey matrimonial lawyer.

SHOW ME THE MATH?

Imagine high-earning Spouse A now pays and deducts $30,000 a year in alimony. Spouse A's income is federally taxed at 33 percent, so the deduction saves him $9,900.

Lower-earning Spouse B owes taxes on the alimony at a 15-percent rate, paying $4,500 instead of the $9,900 that would be due at Spouse A's rate. The two have saved $5,400 between them, and Spouse A got a break that makes the payments more affordable.

Tom Leustek estimates the deduction saves him about $5,000 a year - "not a trivial amount to me," the New Jersey plant biology professor says.

"The person actually getting the money should be the one who pays taxes on it," he says.

HOW MANY PEOPLE GET ALIMONY ANYWAY?

Government statistics vary. The Census Bureau says 243,000 people got alimony last year, 98 percent of them women. The Internal Revenue Service says 361,000 taxpayers claimed they paid a total of $9.6 billion in alimony in 2015, though only 178,000 reported receiving spousal support. (The gap has irked the government for years; the IRS said in 2014 it was improving its strategies for dealing with the discrepancies.)

Child support payments are separate, and over 4.3 million people got them last year, census figures show. Some divorces involve alimony and child support.

The U.S. divorce rate peaked in the early 1980s and has kept declining since. More than 813,000 couples around the country divorced in 2014, according to federal statistics.

WHAT ARE THE ARGUMENTS FOR THE CHANGE?

"A divorced couple can often achieve a better tax result for payments between them than a married couple can," the committee noted last month.

The panel also argued that alimony should be treated like child support, which already isn't tax-deductible for the payer or taxable for the recipient.

Congress's nonpartisan Joint Committee on Taxation estimates repealing the deduction will add $6.9 billion in new tax revenue over 10 years. That is equal to less than half a percent of the $1.5 trillion tax cut plan.

WHAT ARE THE CONCERNS?

Critics fear that without the deduction, higher-earning spouses won't pay as much to their exes. New York City matrimonial lawyer Malcolm S. Taub foresees future alimony recipients losing 10 to 15 percent of what they'd get under the current law.

Some prenuptial agreements have alimony provisions that assume the tax deduction, said Scott Swier, a South Dakota attorney. Some states might need to change alimony guidelines embedded in their laws.

The National Organization for Women and the American Academy of Matrimonial Lawyers opposed the change. Boston-based family law attorney Regina Snow Mandl was concerned enough to send clients an email alert. Massachusetts matrimonial lawyer Wendy Hickey says she's fielding calls from clients "in a panic, wanting to get everything done," though the pressure has eased since lawmakers pushed back the effective date to 2019.

As for the "divorce subsidy" argument, Mandl retorts: "I've never heard a couple say that they're getting divorced for tax reasons."